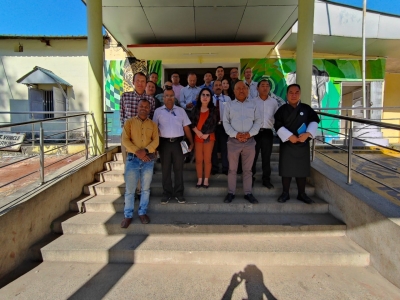 Guwahati: The Northeast Frontier Railway (NFR) and Bhutan have discussed undertaking trade collaborations between the NFR and the neighbouring country, supporting the logistics avenues for future linkages, officials said on Tuesday.

The visiting delegations visited Hasimara railway station where an infrastructure is being strategically developed by the NFR for enabling trade with Bhutan.

The CPRO said that a plan to build a siding along with a warehouse in collaboration with the Central Warehousing Corporation is underway to promote logistic trade with Bhutan.

In fact, Indian Railways has already delivered its first consignment of goods to Bhutan through a multi-modal route consisting of 75 utility vehicles.

The vehicles were transported from Chennai to Hasimara railway station by New Modified Goods (NMG) rake — a rake specially designed to transport light motor vehicles (LMV), that reached Alipurduar division on October, 28 and then the consignment was taken to Bhutan by roadways.

The delegation intends to visit Changrabandha station in the near future.

The Alipurduar division relayed to the delegates of Bhutan Government, the vision of railways as the prime eco-friendly mode of transportation for goods logistic and as a sustainable option for mass movement in the country and also in South-East Asia, De said.

NFR officials explained to the Bhutanese delegations the cost competitiveness and strategic abilities to transport goods in bulk and expeditiously to markets across India and Bhutan.