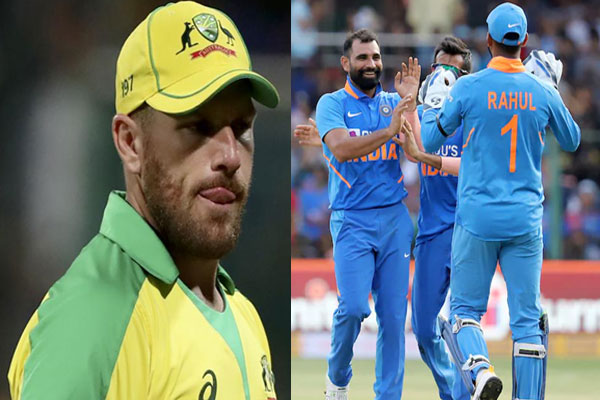 Bengaluru: Australia captain Aaron Finch has heaped praise on India’s death bowling, saying it was one of the reasons why the hosts ended the winning side in the just-concluded three-match ODI series.

In the final ODI played on Sunday, Australia couldn’t capitalize on the strong platform, set up by a third-wicket partnership of 127 between Steve Smith and Marnus Labuschagne, and ended up with 286/9 — a below-par score at the Chinnaswamy surface which India chased down comfortably with seven wickets in hand.

Australia lost five wickets in the last 10 overs and the regular strikes from the Indian bowlers meant that the last three overs yielded just 13 runs to restrict the visitors below 300.

“I think probably guys not getting through to those last couple of overs (hurt us),” Finch said at the post-match presser.

“I think in the last two games, we have had the bowlers batting for the majority of the last few overs. We saw in Rajkot, the damage that K.L. (Rahul) could do in the back end because he was a settled batter. I think that’s an area we just missed a couple of tricks. Just not having an in the batter being in and having faced 20 or 30 balls to get us deeper and get us to the back end,” he added.

Part of the reason for Australia not being able to accelerate towards the end was the accuracy of the Indian pacers — Mohammed Shami, Jasprit Bumrah and Navdeep Saini — who bowled stream of yorkers and didn’t provide any room to the batters, both in Rajkot and in Bengaluru.

“Credit to India, their death bowling in the last few games was exceptional,” Finch said.

“Shami was nailing his yorkers, Saini in the last two games, and Bumrah. In both games, they were exceptional. You can look at where we could have improved, but also you’ve got to give some credit to India. They were unbelievable at the death,” he added.