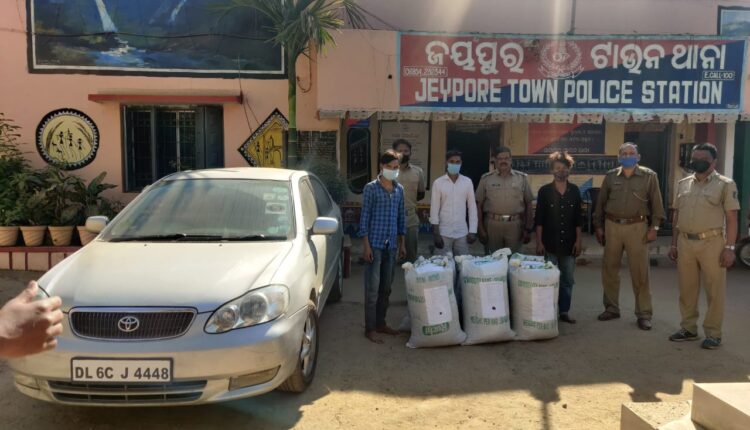 While personnel of the Jeypore Town Police Station were patrolling, they suspected the movement of a Toyota Corrola car bearing registration number DL 6CJ-4448. They stopped the vehicle at Satiguda Dam Chowk on bypass road and searched it.

Six pockets of ganja and other articles were recovered from the vehicle’s dickey during the frisking. Preliminary investigation revealed the three accused were smuggling ganja after procuring it from Araku area of Andhra Pradesh for higher profit.

Also, the vehicle, one laptop, three mobiles and Rs 1900 cash were seized from the possession of the accused.

The three accused were identified as Deepak Singh from Aligarh in Uttar Pradesh, Raju Ravi Das from Okhla in New Delhi and Bablu Chouhan from Faridabad in Haryana.

A case was registered at Jeypore Town Police Station with case no-365 under Section 20(b)(ii)(c)/25 NDPS Act. Investigation into the matter is on.