INDIAINDIA & BEYOND
By Sambad English Bureau On Jan 14, 2018 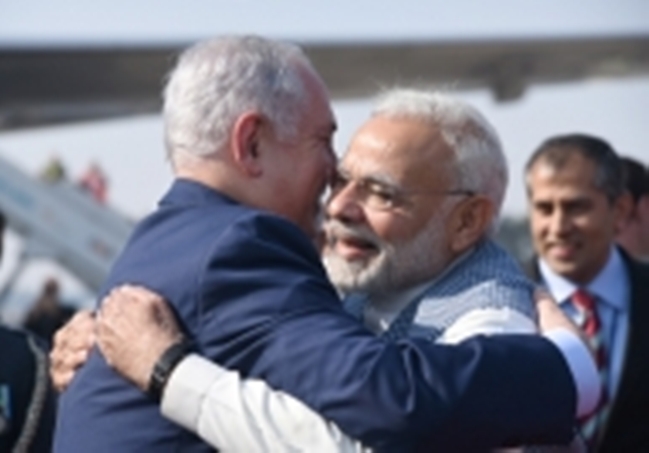 New Delhi: Prime Minister Narendra Modi on Sunday set aside protocol to personally receive his Israeli counterpart and “friend” Benjamin Netanyahu with a warm hug as he arrived here on a six-day visit to step up growing trade as well as military and strategic ties between the two countries.

As Netanyahu and his wife Sara stepped on the red carpet at the airport here, a smiling Modi embraced the Israeli leader and then shook hands with the couple.

“Welcome to India, my friend Netanyahu! Your visit to India is historic and special. It will further cement the close friendship between our nations,” Modi tweeted in English and Hebrew.

Netanyahu quickly responded. “Thank you to my good friend Narendra Modi for the warm welcome.”
“Very much appreciate the gesture,” the Jerusalem Post quoted Netanyahu as saying.

Modi and Netanyahu, who have developed a close friendship, exchanging greetings on social media on various occasions and hugging each other heartily, will hold talks on a range of issues on Monday after President Ram Nath Kovind formally welcomes the Israeli leader at Rashtrapati Bhavan.

The visit, which marks 25 years since the establishment of diplomatic relations between the two countries, comes six months after Modi became the first Indian Prime Minister to visit the Jewish state in July last year.

Before embarking on the flight to India, Netanyahu said his trip was intended to strengthen bilateral relations “even more”.

“This visit is an opportunity to enhance cooperation with a global economic, security, technology and tourism power,” he said. “Modi is a close friend of Israel and of mine and I appreciate the fact that he will accompany me on extensive parts of my visit.”

He said strengthening relationship between Israel and “this important world power… helps us with security, the economy, trade, tourism and many other aspects”.

The Bharatiya Janata Party condemned the meme video, alleging that the opposition party had “lost its sense and balance” which “does not behove a mature political party”.

Union Minister and senior BJP leader Prakash Javadekar said: “Modiji’s influence as world leader is increasing. Today only, a survey found him at No 3 in popularity as a world leader.”

In a sign of growing importance to the ties with Israel, the government on Sunday renamed Delhi’s Teen Murti Chowk as Teen Murti-Haifa Chowk after the Israeli city.

Modi and Netanyahu laid a wreath at the iconic Teen Murti war memorial where they were received by Army Chief General Bipin Rawat and Foreign Secretary S. Jaishankar.

The two leaders paid homage to Indian soldiers who fell in the battle of Haifa during World War I.

Netanyahu’s entourage includes the largest-ever delegation of Israeli business people of some 130.

According to Israeli newspaper Haaretz, these businessmen include senior executives of Aeronautics Defense Systems — an Israeli drone maker currently under criminal investigation by the police’s international crimes division.

This is the first visit to India by an Israeli Prime Minister since Ariel Sharon came in 2003.

On Monday morning, Netanyahu will lay a wreath at Rajghat to pay homage to Mahatma Gandhi. On Tuesday, he will fly to Agra to view the iconic Taj Mahal.

Netanyahu and Modi will open the Raisina Dialogue, India’s annual geopolitical conference to be attended by people from around the world, including former US nuclear negotiator Wendy Sherman, in Delhi.

Netanyahu and Modi will also visit the Indian Prime Minister’s home state Gujarat where they will go to the Centre of Excellence in Agriculture at Vadrad.

Netanyahu will interact with business leaders in Mumbai and meet representatives of Bollywood. He will return to Israel on Friday afternoon from Mumbai.(IANS)