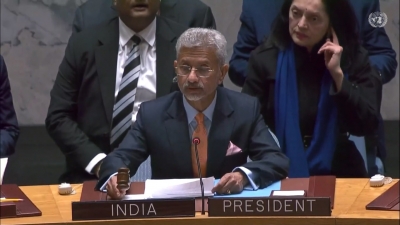 United Nations: External Affairs Minister S. Jaishankar has discussed with UN Secretary-General Antonio Guterres working together on G20, which is being led by India.

Jaishankar tweeted after their meeting here on Wednesday that they “exchanged views on working together during India’s G20 Presidency”.

India became President of the G20 group of major industrialised and emerging economies as the world faces a double whammy of crises from the fallout of the Russian invasion of Ukraine and the lingering effects of the Covid-19 pandemic.

The Ukraine-Russia war was also discussed and Jaishankar tweeted that he valued Guterres’s insights.

Earlier, Guterres had spoken at the ministerial-level meeting of the Security Council on New Orientation for a Reformed Multilateral System or NORMS during which India put the spotlight on reforming the Council.

He said that a majority in the UN want the Council “reformed to reflect today’s geopolitical realities” and offered his support for the effort.

Speaking at the Council, United Arab Emirates Minister of Culture and Youth Noura Al Kaabi endorsed India for a permanent seat in a reformed Council

Jaishankar tweeted after their meeting that he thanked her for the “clear-cut expression of support” for India getting a permanent seat.

He tweeted after meeting Poland’s Foreign Affairs Vice Minister Wojciech Gerwel that they exchanged views on the conflict in Ukraine, which borders Poland, and its ramifications.

Jaishankar also met with Armenia’s Foreign Minister Ararat Mirzoyan and discussed building on cooperation between their countries, he tweeted.

Miscreant fires at woman inside her house in Odisha’s Deogarh, victim critical