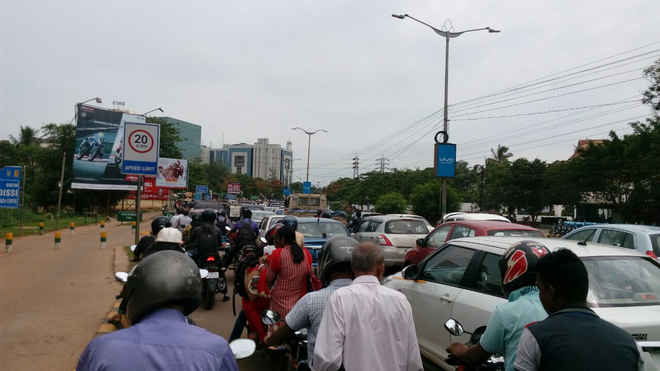 Bhubaneswar: In a bid to reduce traffic congestion and heavy jam in Chandrasekharpur area in Odisha capital, Bhubaneswar Development Authority (BDA) is planning to construct two parallel roads on Jayadev Vihar and Nandankanan route in the city.

In view of population growth in posh area in Chandrasekharpur, which may register over 7 lakh population by 2030, the BDA has prepared a master plan to resolve the vehicle jam on Jaydev Vihar-Nandankanan route after the four-lane road failed to control the rush.

According to sources in BDA, two main parallel roads will be constructed on the busy route for which the BDA will prepare a DPR. The project will be approved from CIDF fund.

Due to heavy jam, accidents are taking place many a time and commuters take long time to reach the destinations. Keeping it in mind, the BDA is planning to construct two parallel roads on Jaydev Vihar-Nanadankanan connecting ten main roads in the area.

Five main roads including Pathargadia-Ringroad link, Pathargadia-Nandankanan road, Pathargadia-ORC (behind Mind Tree office), Utkal Healthcare-Rail Vihar road, Hatisuani-Ekamrakanan square will be connected to left side parallel road. The Public Works department will bear the expenses for the construction of parallel road on left side.

Similarly, right side parallel road from Sainik school road to Subhash enclave via Damana chhak, from Patia Big Baazar to Daya west canal road via Enjana, from Netaji Subhash Bose enclave to Enjana, Ring Road, from right side embankment of Daya West canal to Ring Road will be constructed on PPP mode.