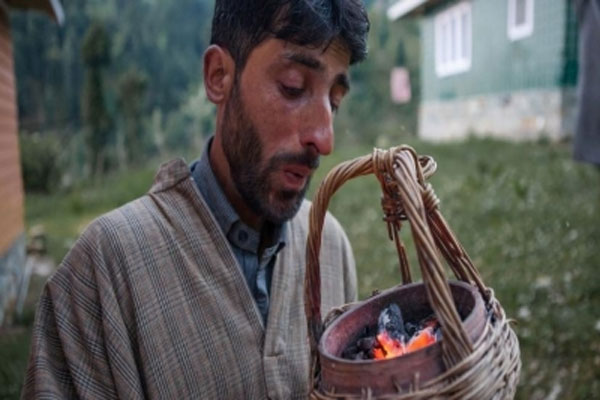 Srinagar: Kangri or Kangaer, an earthenware pot containing burning coal encased in a wicker basket, is an inexpensive way to keep warm during the harsh winters of Kashmir. The combination of the long pheran, the traditional Kashmiri attire, and the kangri is the most effective and reliable way to safeguard against the biting cold for the poor and underprivileged population in far-flung areas of rural Kashmir where electricity is still a luxury.

However, during the last few years, the Valley has witnessed many cases of Kangri cancer, a type of squamous cell carcinoma. Medical experts claim that the overuse of the kangri pot is the principal cause of this type of cancer. A recent study revealed that Kangri cancer patients had a history of using a kangri for 5-6 hours a day, 3-4 months in a year. Elements that are believed to contribute to the development of this cancer are heat, burning wood particles, smoke and burnt chinar leaves.

Dr Shaqul Qamar Wani, MD, Associate Professor and Consultant, Department of Radiation Oncology, State Cancer Institute, Sher-I-Kashmir Institute of Medical Sciences, Srinagar, told 101Reporters, “Kangri cancer is a type of squamous cell skin cancer that is more aggressive than other skin cancers and that usually occurs in the lower part of the body (lower abdomen and inner thighs), due to the frequent placement of the kangri close to these areas to keep oneself warm during chilling winters.

“As kangri is made and used in Kashmir, this cancer is found only in this part of the Indian subcontinent. In time, the heat injury to the skin takes the form of superficial reticular blackish-brown coloured lesions called ‘erythema ab igne’ or fire stains, which itself is a precancerous condition. If left untreated, these lesions may take the form of single or multiple well-defined lesions that will continue to grow and may be associated with itching, bloody discharge, and non-healing ulcers.”

An alarming increase in cases – cause for concern

Expressing her concern over the rising number of Kangri cancer cases in the region, she said, “For the last five years, we have registered over 400 patients with skin cancer, including the Kangri cancer patients in our hospital. The educated population are well aware of this disease. However, we need to have frequent awareness programmes for the economically weaker sections of society living in remote areas.”

Abdul Gani, a 75-year-old man from Central Kashmir’s Budgam district, told 101Reporters, “Two years ago, I had some burn marks because of using kangri. I applied some homemade remedies, but they did not help much. So I decided to visit a dermatologist who, after brief treatment, suggested that I visit an oncologist.”

Gani’s grandson, Aqib Hassan, said that his grandfather was advised to undergo many tests after consulting with the oncologist. He recalled that they were stunned when the doctor informed them that the burn marks were starting to show signs of cancer, a disease that was unknown to them.

“Later, we were advised to consider radiotherapy. My grandfather showed good recovery signs after the procedure. However, due to his advanced age, he suffered from various other health issues besides weakness,” said Hassan. The preventive applications of radiation have been noted as “encouraging” in reducing some tumours and eliminating others.

Another patient, Ghulam Nabi Dar, 67, from North Kashmir’s Baramulla district, was at SKIMS for his follow up check-up after being detected with Kangri cancer last year.

He said that before consulting an oncologist, he thought that the burns caused by the kangri were because of a common allergy as it caused itching, bleeding and ulceration. “I was shocked after hearing the diagnosis that there is even such a type of cancer. Initially, I was distraught, but doctors and counsellors encouraged me and gave me hope, and I was motivated to fight this disease,” Dar told 101Reporters.

He added that the doctors educated him about preventing a recurrence of cancer by avoiding the use of kangri pots close to the body. They recommended he use adequate thermal protective clothing and alternative heat sources.

Dr Shaqul said that detecting this cancer early is the key to the cure. If the disease is localised, then a simple surgical procedure is effective. If it is advanced to locoregional draining nodes, it can be dealt with surgery followed by radiation to the problematic areas. All the facilities required to manage such patients are available in the Valley now.

An article published by Dr Mohmad Ashraf Teli, Departments of Radiotherapy and Plastic and Reconstructive Surgery, SKIMS, Soura, Srinagar-Kashmir, revealed that surgery is the frequent modality of treatment used in the management of these tumours.

Medical health professionals also believe that education and awareness about this type of cancer among the local Kashmiri community could help reduce the incidence rates.

“Regular medical screening at periodic intervals with blood tests, scans, and physical examinations is important due to its high metastasising potential and possibility of recurrence. Kangri cancer can be altogether prevented by finding alternative ways of keeping ourselves warm during winters.

“My sincere request to our community is to initiate and practice healthy measures from today to have a better and happy tomorrow. It does not matter how monetarily sound we are; there is always a way out. It may be difficult to replace kangri use all at once, but it will be possible over time. Until then, we should use it judiciously and try to keep it as far away from our skin as possible,” said Dr Shaqul.