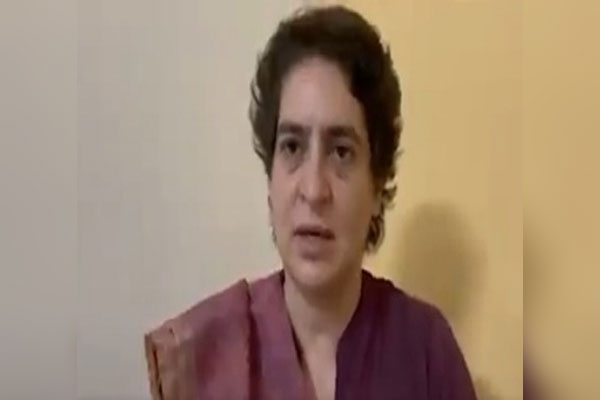 New Delhi: Amid the ongoing hijab row in Karnataka, Congress General Secretary Priyanka Gandhi Vadra on Wednesday came out in support of the girls protesting in favour of hijab saying it’s women’s right to decide what they want to wear.

Taking to Twitter, she said: “Whether it is a bikini, a ghoonghat, a pair of jeans or a hijab, it is a woman’s right to decide what she wants to wear. This right is GUARANTEED by the Indian constitution. Stop harassing women.” #ladkihoonladsaktihoon

On Tuesday, the Congress had raised this issue in Parliament.

Congress General Secretary Ajay Maken tweeted the photo of a girl surrounded by many students captioned, “One tigress and 100 baboons”.

The Karnataka High Court is likely to hear on Wednesday the petitions questioning denial of permission to wear hijab to classrooms by Udupi Pre-University College students and others.

It had adjourned the matter on Tuesday.

A single bench of Justice Krishna S. Dixit also requested the student community to maintain peace in the state.

Meanwhile, considering the volatile situation in the state against the backdrop of the hijab crisis, the BJP government has declared a three-day holiday for schools and colleges starting from Wednesday.

Chief Minister Basavaraj Bommai has requested the students to wait until the court order and not to get provoked.

“I appeal to all students, teachers and management of schools and colleges as well as people of Karnataka to maintain peace and harmony. I have ordered the closure of all high schools and colleges for the next three days. All concerned are requested to cooperate,” he said.

At the hearing on Tuesday, the bench asked counsel to present their arguments briefly, saying arguments and counter-arguments can’t be heard till the end of the academic year.

Justice Dixit has also observed that the court has confidence in the discretionary power of the public and students.

Watch: Indian Army rescues trekker who fell into hill cleft and was stranded for two days