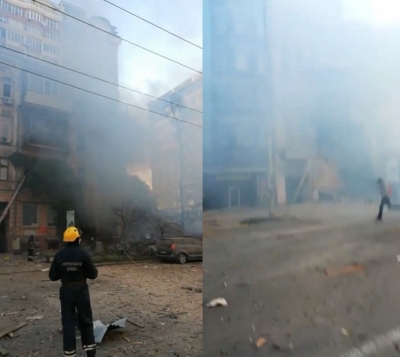 Kiev: A top Ukrainian official on Monday claimed that Russia used kamakaze drones to attack Kiev, the latest in a series of recent strikes targeting the capital city.

Taking to Twitter on Monday morning, Andriy Yermak, head of Ukrainian President Volodymyr Zelensky’s staff, said: “The capital was attacked by kamikaze drones. The Russians think it will help them, but such actions are like agony.

Also known as loitering munitions, kamakaze drones are small aerial weapons which are destroyed after striking the target. Unlike other drones, which are supposed to return home after dropping missiles, kamikaze drones are disposable.

The name derives from the Japanese pilots who volunteered to crash their planes in suicide missions in World War Two.

Also confirming the drone attacks which occurred between 6.30 a.m. to 8.10 a.m., Kiev Mayor Vitalii Klitschko warned residents of the capital not to go to the city centre unless there was an urgent need.

In a series of tweets, he said that the attacks triggered an explosion in a residential building in the Shevchenko district, from where a woman’s body was recovered, while 18 people were rescued.

While three people have been hospitalized, one remain trapped under the rubble, the Mayor said, adding that search and rescue operations were ongoing.

In a social media post, Zelenksy said: “Kamikaze drones and missiles are attacking all of Ukraine. A residential building was hit in Kiev.

“The enemy can attack our cities, but it won’t be able to break us. The occupiers will get only fair punishment and condemnation of future generations. And we will get victory.”

Meanwhile, Mayor of Mykolaiv Oleksandr Senkevich said that three drones had ignited the tanks in the port city late Sunday evening, just hours before the attack in Kiev.

A Ukrainian air force official said the drones had flown into the country from the south, reports the BBC.

Last week, Russia attacked Ukrainian cities, including Kiev, with at least 83 missiles which led to the killing of 14 people, while several regions were left without electricity and water.

This was the first time since the war began on February 24 that the centre of Kiev had been directly targeted.

The Russian attacks came in retaliation to Ukraine blowing up a key bridge in Crimea.

Cuttack: Two arrested for forcing youth to run by tying him to motorcycle