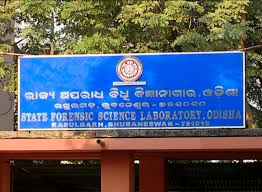 The regional channel, flashing a forensic report, telecast that traces of semen of two persons were found from the undergarments of the class-IX student, who was found hanging in her home on Monday.

Claiming the report aired by the TV channel not correct, the SFCL, in a press statement (a copy of which is in possession of OST), said: “This is clarified that the inter-divisional report was not the final one, that has been issued to the honourable court or the investigating agency. After careful and meticulous examination of the exhibits by a group of trained scientists through various methods and techniques including the latest DNA profiling test, the final report was prepared by the experts of the laboratory and was issued vide letter no 16392/FSL dt. 23.10.2017.”

“The findings in the preliminary inter divisional report shown by the particular TV channel is not correct,” the statement read.

Earlier this week, the State Crime Branch in its report submitted to the National Human Rights Commission (NHRC) had stated that no ‘foreign articles’ were found in her undergarments.

Notably, the class IX student of Mushaguda village under Potangi police limits in Koraput district was allegedly gang raped by four security personnel, while she was returning from the Kunduli Haat (market) on October 10, 2017, that created a huge public outcry in the State.