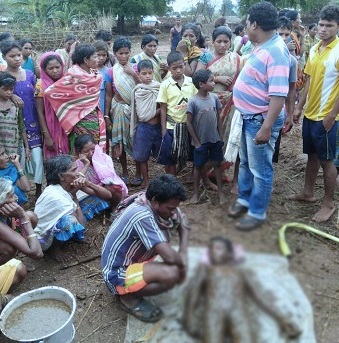 In the era of technological and digital advancement, superstition still reigns supreme in several parts of Odisha. A shocking story of superstition taking over medical science has come to the fore in Rayagada village where a minor boy was killed and villagers applied cow dung paste to bring him back to life.

After putting cow dung paste, the body was kept buried under earth for around 40 minutes with a hope that the minor will wake up from death.

The incident took place at Sana Litipuli village under Sunakhandi of Kalyansinghpur block in the tribal-dominated Rayagada district.

According to reports, lightning strike killed the minor identified as Munna Kadreka while he was collecting mangoes along with his two friends. His associates also sustained critical injuries in the lightning.

While the injured boys were admitted to a hospital in critical condition, the deceased’s family members applied cow dung paste on his entire body and waited for 40 minutes to see the miracle. However, nothing happened and the minor did not return to life.