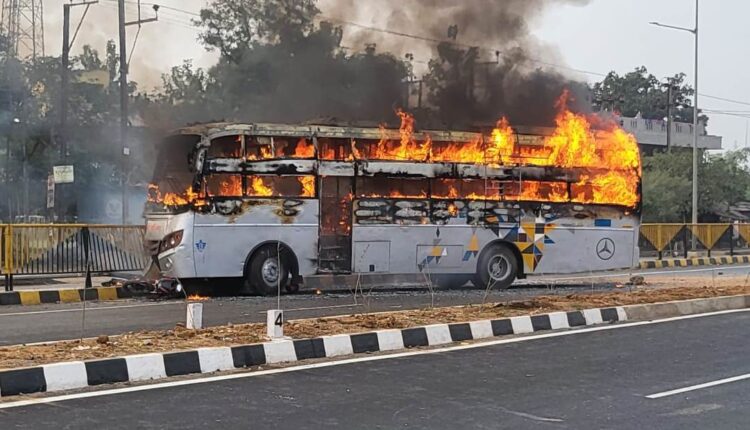 Baripada: Angry locals set an empty passenger bus on fire after it hit a biker on National Highway 18 near Baripada town in Odisha’s Mayurbhanj district today.

The biker sustained grievous injuries in the incident. Even, one of his legs below the knee has been severed in the mishap, said a local.

The bus, named ‘Ranijta’, hit the biker from rear while he was in a stationary position in front of a filling station on the NH 18. A few commuters rescued the biker, a resident of Chandua area, and rushed him to Pandit Raghunath Murmu Medical College and Hospital in Baripada in a critical condition, sources said.

Soon, locals congregated at the spot and set the empty bus on fire, sources added.

On being informed, Baripada Town police reached the spot and began a probe into the incident.

“A platoon of police force has been deployed at the spot. Fire brigade personnel have been pressed into service to douse the fire,” said a police officer.

The locals, meanwhile, urged the National Highway Authority of India (NHAI) and the state government to construct an over bridge in the locality.