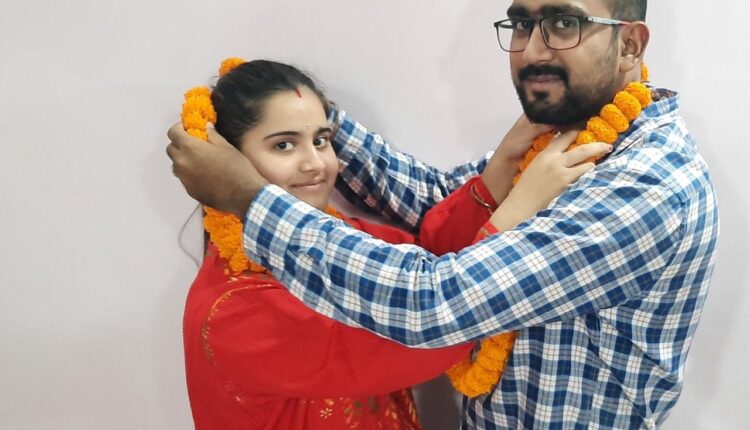 Bhubaneswar: Love knows no bounds. The saying has been proved again in case of Akanksha Singh, a young woman from Gorakhpur in Uttar Pradesh, and Prithviraj Panda from Sundarpada area.

Even though the Gorakhpur Police visited Bhubaneswar and remained adamant to take Akanksha back after her father filed a kidnapping case against Prithviraj in Gorakhpur, the young woman’s love won the battle.

Akanksha and Prithviraj came to know each other when the later was working with a private company in Gorakhpur.

On June 16, Akanksha reached Bhubaneswar via New Delhi to meet her lover, Prithviraj. She subsequently married Prithviraj and was staying at her in-laws’ house.

In the meantime, Akanksha’s father lodged a complaint at Gorakhpur police station accusing Prithviraj of kidnapping her. Following this, the Gorakhpur Police reached Bhubaneswar and wanted to take back her.

Akanksha then sought the help of the Airfield Police Station. This led to a tussle between the Gorakhpur police and the Commissionerate of Police.

The Commissionerate Police took Akanksha to a short-stay home and produced her before the Chief Judicial Magistrate, Khurdha district today.

After recording the young woman’s statement under Section 164, the Chief Judicial Magistrate Court disposed off the case.

Radhakant Sahu, IIC, Airfield Police Station said a case was registered by the young woman’s father under Section 363 in Gorakhpur. After recording the young woman’s statement and verifying her documents, the court annulled the case and allowed her to stay at her in-laws’ house.

An officer of Gorakhpur Police said as Akanksha is an adult, she can stay wherever she wants.

Sec 144 to be clamped in Puri town; check details