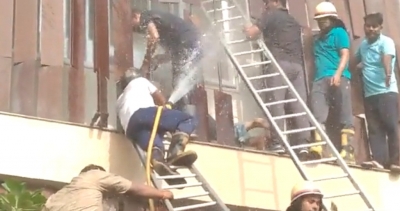 Lucknow: More than 20 persons have been shifted to the hospital in an unconscious state after fire broke out in a hotel in Lucknow. Hospital sources said that two women have succumbed to burn injuries. Official confirmation was awaited.

Several persons, including employees and guests have received burn injuries, even as fire tenders were trying to douse the flames.

Fire personnel, meanwhile, were breaking open the glass panes to rescue those trapped inside the hotel. Several guests complained of severe suffocation since the smoke was filling the rooms.

More than 20 people were still trapped inside.

Ambulances have also been called in and nearby hospitals have been put on alert.

The hotel has a narrow approach road, which was causing problems in relief and rescue operations.

It is not yet known how the fire started.