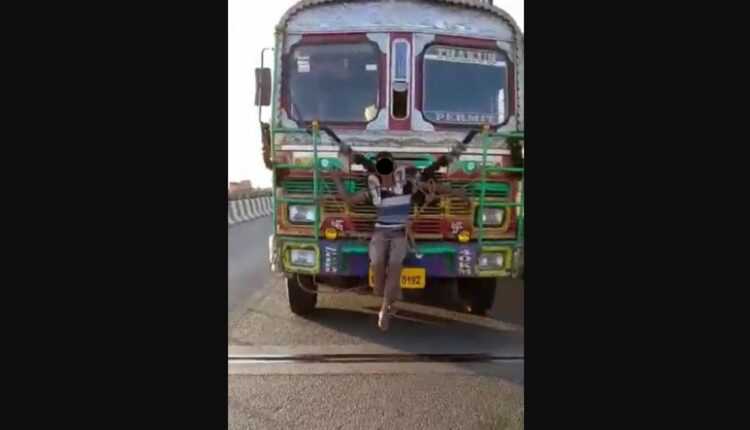 Jagatsinghpur: The Paradeep Lock Police yesterday arrested a person for allegedly tying a man to a moving truck as a punishment for stealing mobile phone.

The accused has been identified as Pravakar Nayak of Betanda under Dharmasala police limits of Jajpur district. He was forwarded to court while efforts were on by cops to apprehend others involved in the incident.

A case has been registered under Sections 342, 323, 294, 307, 506 and 34 of IPC on the basis of a complaint lodged by victim Gajendra Swain of Tikarpanga under Marshaghai police limits in Kendrapara district.

Swain had reportedly stolen a mobile phone from a truck. He was later nabbed by some truck drivers.

In an act on punishment, they tied him to the front portion of the vehicle, garlanded him with footwears, and drove the truck on Bhutamundai bridge of Paradip-Chandikhole National Highway under Paradeep Lock police limits. One of them recorded a video of the incident with mobile phone.

The video has gone viral on various social media platforms.

The Odisha Human Rights Commission (OHRC), taking suo motu cognisance of the incident, had served a notice to the Jagatsinghpur SP to conduct a probe into the matter and submit a report within 15 days.