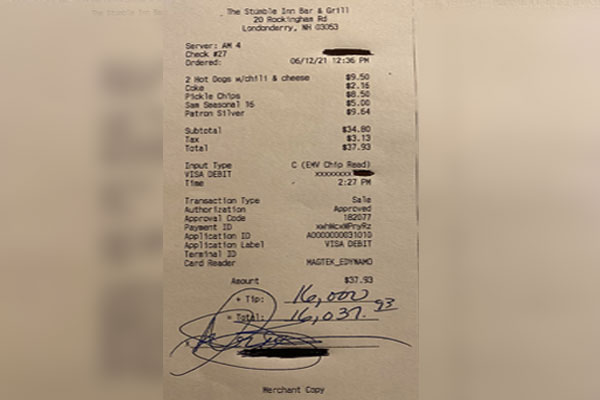 Bhubaneswar/New Hampshire: Amid all the daunting news related to the ongoing COVID-19 crisis, one man has won internet after the news of his generous donation of a whopping amount of Rs 12 lakh to a restaurant’s service staff, surfaced.

Michael Zarella, the owner of the restaurant, shared a snapshot of the signed bill on Facebook and wrote, “Stumble inn had a very generous customer. We thank you for your generosity.”

Zarella told media that while making the payment, their generous customer told the bartender at service to not spend all the money in one place. Initially, the bartender didn’t notice the figures on the cheque and later, when she did later, it came as a total shock for them all.

The amount of the tip was later distributed among all the eight serving staff working that day. A ‘good amount’ of the tip was also given to the four kitchen staffers from that day, Zarella added.