Police in a release informed that after the camp was busted, a large cache of arms, explosives, IEDs and other incriminating articles were recovered. 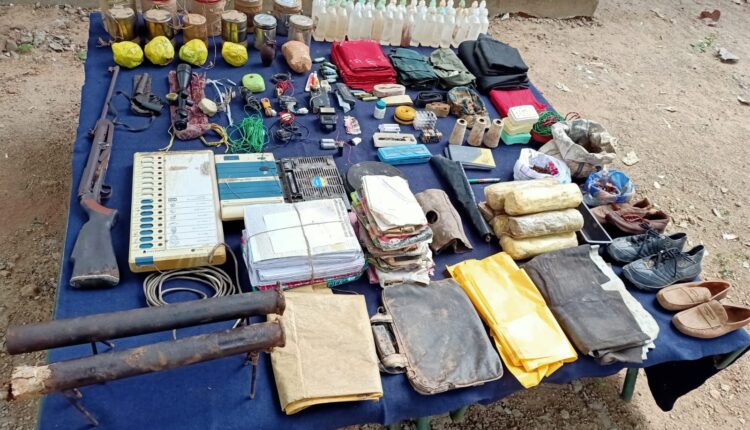 Malkangiri: Security personnel busted a major Maoist dump along the Andhra Pradesh border in jungle area of Dhakadpadar village under Jodamba police limits of Malkangiri district in Odisha on Tuesday evening. The combing operation was carried out basing on specific information.

Police in a release informed that after the camp was busted, a large cache of arms, explosives, IEDs and other incriminating articles were recovered. It is suspected that these articles were intended to make IEDs  targeting civilians and security forces. The seized articles include country made pistol, 16 kg tiffin IED, four hand made codex wire, one HR grenade, two hand grenade, two detonators, two electronic detonator wire, empty detonator, maoist uniform, four bundles of electric wire, etc among other things.

“This is a major jolt to the subversive and anti-national design of Maoists in this area. We are suspecting that these explosives along with other articles belong to Maoist cadres of AOBSZC and they were intended to be sued against innocent civilians and security forces to carry out their subversive, anti-national activities. In the wake of recovery, further combing and search operations are going on in the area,” the release stated.

Addressing mediapersons, Malkangiri SP Nitesh Wadhwani said the search operation was conducted basing on specific intelligence from none other than villagers in the area. “A lot of arms and ammunitions including country made rifles, IEDs, etc were seized from the camp of the ultras. This is proof that the Odisha Police’s Ghar Wapsi initiative is being successful in achieving achieving desired targets. We hope this impact spreads to other Maoist-affected areas as well,” he said.