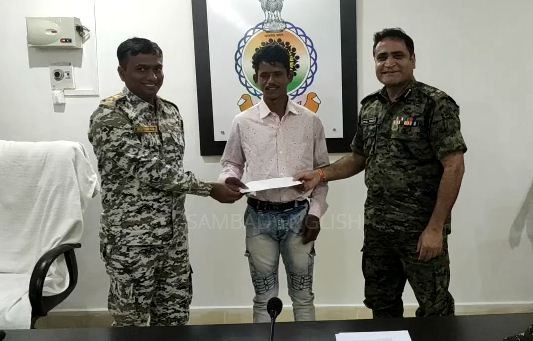 Raipur: A Naxal commander with a reward of Rs 8 lakh on his head involved in several incidents of attacks on security forces, including the 2008 Nayagarh armoury loot and killing of policemen, surrendered in Chhattisgarh’s Bijapur district on Monday, police said.

Prashant Modiyam, alias Sonu, turned himself in before Bijapur Superintendent of Police Divyang Patel and a CRPF official citing disappointment with the hollow Maoist ideology and harsh forest life, an official here said.

The 25-year-old Modiyam, a resident of Peddakorma village in Bijapur, had been associated with the outlawed CPI (Maoist) since childhood, and in 2007 was inducted as militia member, and then elevated as member of ‘platoon number 12’ of the Naxals the following year, he said.

“Later, he was made ‘doctor’ of the divisional supply team and trained to provide medical aid to cadre. In 2011, he was shifted to Odisha where he worked as ‘doctor commander’ and imparted medical treatment training to his colleagues,” the official said.

Modiyam was involved in eight major Maoist incidents in Chhattisgarh and Odisha between 2007 and 2019, he said.

Modiyam was given ‘encouragement’ amount of Rs 10,000 and will be provided further assistance as per the state government’s surrender and rehabilitation policy, he added.

Kamal Haasan summoned by police in connection with ‘Indian 2’ accident