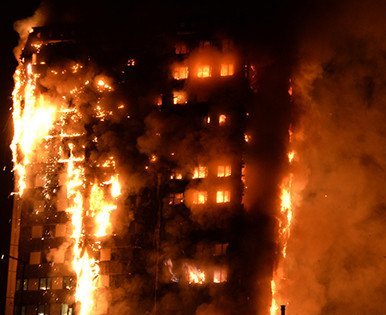 London: A massive fire broke out in a 24-storey apartment building here on Wednesday, with flames seen from the second floor to the top of the building, officials said.

The firefighters were battling to rescue people trapped inside the tower block in west London, The Guardian reported.

The fire in the 24-storey Grenfell Tower on Latimer Road near Notting Hill started in the early hours of Wednesday.

The London Fire Brigade said on Twitter they were responding to a fire on the Lancaster West Estate after multiple calls. Two hundred fire fighters were at the scene along with forty engines that were called at just after 12.50 a.m.

In a statement on Facebook, Assistant Commissioner Dan Daly said: “Firefighters wearing breathing apparatus are working extremely hard in very difficult conditions to tackle this fire. This is a large and very serious incident and we have deployed numerous resources and specialist appliances.”

The statement said the fire reached from the second storey of the building to the top and the cause of the fire was not known.

The London Ambulance Service said it had sent “a number of resources” to the area including its hazardous area response team.

London Mayor Sadiq Khan said in a statement on Twitter that it was a “major incident”.

Exchange of fire between Indian and Pakistani army at LoC