Meet the real heroes who won India the 1983 World Cup 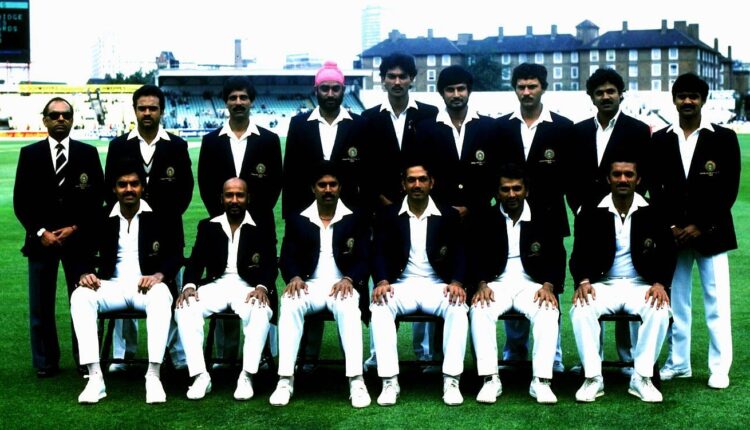 New Delhi: It has been almost four decades since the 1983 World Cup, but even today the historic final between India and West Indies continues to hold a special place in the hearts of Indian cricket fans.

Kapil Dev’s running catch to dismiss Sir Viv Richards is still etched in the memories of the generation that cheered India through the nail-biter of a final at Lord’s on June 25, 1983.

The victory was important in many ways. It scripted a new era for Indian cricket. Up against Clive Lloyd’s mighty West Indies side and with just 183 runs to defend, Kapil’s Devils did the impossible by delivering a memorable performance to lift the prestigious trophy.

Why was beating the West Indies no joke back then?

During ’80s, the West Indies were an invincible side and they were title contenders whenever they used to take part in any World Championships. In that period, even the best batters of the world would be wary of facing the deadly West Indies bowlers, who used to play with real aggression.

They won the 1975 and 1979 World Cups and their domination made teams believe that there is one West Indies and then there are the rest of the sides in the world.

The 1983 World Cup was expected to follow similar lines, with the Windies eyeing a hat-trick of titles. But on June 25, the Kapil Dev-led side scripted history and convincingly compelled the rest of the world to believe that teams from Asia can lay their hands on the trophy as well.

After the historic feat, the Indian cricket team have won two more world titles till date – the 2007 World T20 and the 2011 ODI World Cup – but what Kapil Dev’s team achieved in England towers over all else.

Now, the much-awaited movie ’83’ starring Ranveer Singh and others is all set to be released on Friday. To celebrate the occasion, IANS revisits the 1983 World Cup heroes to find out what they are doing now.

Kapil Dev: He was the captain of the Indian team in 1982-87 and led India to the historic World Cup win. He took that brilliant catch running backwards to dismiss the dangerous-looking Sir Viv Richards in that tournament. The Haryana Hurricane kept playing international cricket till 1994, notching up 434 Test wickets in 131 Test matches, a record broken in 2000 by Courtney Walsh. Later, he served as an India coach. Now he is associated with a TV news channel as a cricket expert and is also a professional golfer. He also has invested in a few restaurants.

Sunil Gavaskar: The ’83 World Cup might not have been his best outing, but the expertise of the living legend did help the team in their campaign to bring home the trophy. After retiring in 1987, he has served as the vice-president of the Mumbai Cricket Association, BCCI interim president, and Chairman of the ICC cricket committee. Today, Gavaskar is counted among the world’s finest cricket commentators. Gavaskar is also a director at the Professional Management Group (PMG).

Mohinder ‘Jimmy’ Amarnath: He was the vice-captain of the World Cup-winning team in 1983 and Man of the Match in both the finals and semi-finals. He picked up three wickets for 12 runs and also scored a crucial 26 in the finals. He later presented a weekly cricket coaching programme on television in the early ’90s, ‘Cricket with Mohinder Amarnath’. Now based out of Goa, Amarnath is a cricket analyst for various news channels.

Krishnamachari Srikkanth: The explosive opener scored the highest (38 runs) in the low-scoring 1983 World Cup final. And he played some good knocks throughout that World Cup. After he hung up his bat in competitive cricket, he coached India A, served as chief India selector, later was an IPL mentor and was also seen commentating on the TNPL. He also penned newspaper columns during IPL 2018 and is running his own business at present.

Balwinder Sandhu: The Mumbai-born pacer had dismissed opener Gordon Greenidge, who was a player of repute in ODIs. He also scored 11 runs and took two wickets in the summit clash. He coached the Mumbai team in the ’90s but was later out of the limelight till the ’83’ team took him on board to coach the actors.

Madan Lal: He took the crucial wickets of Desmond Haynes, Sir Viv Richards and Larry Gomes in the historic final. Following retirement, he coached the UAE team and even the Indian national team for a while. At present, he is a cricket analyst on TV channels and runs a cricket academy at the Siri Fort Sports Complex, New Delhi.

Syed Kirmani: He bagged the award for the best wicket keeper in the 1983 Cricket World Cup and is considered to be one of the best glovemen to have played for India. He starred in the 1985 Bollywood film, ‘Kabhi Ajnabi The’. He also received the 2015 Col C.K. Nayudu Lifetime Achievement Award.

Yashpal Sharma: He was a middle-order batter and also scored the second highest number of runs in the 1983 World Cup. Post-retirement, he became the chief selector for Team India. In 2014, he was appointed head of Delhi’s cricket advisory committee. He passed away earlier this year in July.

Kirti Azad: He was a batter in the 1983 World Cup team and retired from all forms of cricket in 1986. Thereafter, he followed in the footsteps of his father, former Union minister and chief minister of Bihar, Bhagwat Jha Azad, and entered politics. He has served as a Lok Sabha member and recently joined the Trinamool Congress after quitting the Indian National Congress.

Roger Binny: He was an all-rounder who impressed everyone with his bowling performance in the 1983 Cricket World Cup. He also took the highest number of wickets in that tournament. He is at present serving as an office-bearer at the Karnataka State Cricket Association (KSCA).

Ravi Shastri: He was an all-rounder. Later, he became the director of Indian national cricket team in 2014 and later served as its head coach until recently, when Rahul Dravid was given the position.

Dilip Vengsarkar: He was a batter and took over the captaincy from Kapil Dev after the 1987 Cricket World Cup. He runs three cricket academies, two in Mumbai and one in Pune. These academies give cricket training for free to selected players.

Sandeep Patil: He was also a batter in the 1983 World Cup-winning squad. He was subsequently offered a role in the musical romantic drama, ‘Kabhi Ajnabi The’ (1985), which also featured Syed Kirmani and Sachin Tendulkar in a bit role. He coached Team India and the ‘A’ team. He also served as the Kenyan team’s coach for a while and was the chairman of selectors in the BCCI.

Sunil Valson: He was the only player in the squad who did not play a single match in the 1983 World Cup. In recent times, he has served as team manager of the Delhi Capitals IPL team.

P.R. Man Singh: He was the team manager and an integral part of the World Cup victory in 1983. He was the only official to accompany the team to England.

No bus service in several routes of Odisha from January 1!