Militants kill Army officer after kidnapping him from wedding 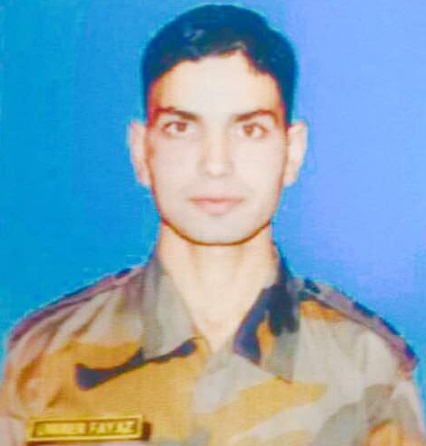 A young Kashmiri Army officer, who was abducted by militants when he had gone to attend a family wedding, was found dead in Jammu and Kashmir’s Shopian district on Wednesday, officials said.

The Army paid tribute to the slain officer, whose bullet-riddled body was found in south Kashmir’s Shopian, vowing to bring those responsible for his killing to justice.

Lieutenant Ummer Faiyaz, who was serving in Akhnoor region of Jammu and Kashmir, was on leave and was in his native place in Kulgam to attend a marriage in his family.

He was kidnapped by militants late on Tuesday evening from Kulgam town, an official said.

“The Army salutes the braveheart and stands by the bereaved family in this hour of tragedy and commits to bring the perpetrators of this heinous act of terror to justice,” the spokesman said.

An advisory was earlier issued by the state police asking its personnel not to visit ancestral homes, especially in south Kashmir areas till it was withdrawn.

There has been a spike in militant activity in most districts of south Kashmir including Pulwama, Shopian, Anantnag and Kulgam. (IANS)

NEET 2017 fiasco: Candidates get question papers in Hindi in Odisha