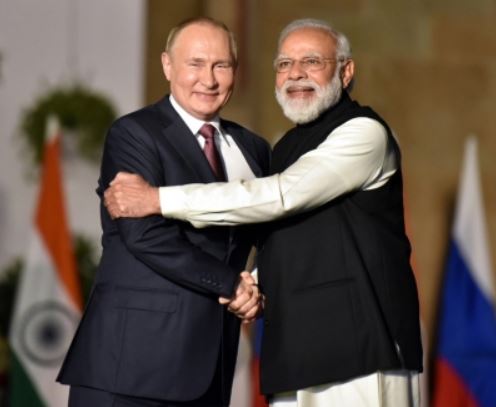 After welcoming Putin, Modi said: “Our meeting today will strengthen our special and privileged strategic partnership. The initiatives that we take today will further increase the scope of our cooperation to new areas.”

Modi, who hosted Putin at the Hyderabad House in the national capital, said the Covid-19 pandemic could not dent the relationship between both the nations and the ties continue to strengthen between the two countries.

He said the relationship between India and Russia is truly a unique and reliable model of interstate friendship, even when the world has witnessed many fundamental changes and different kinds of geopolitical equations emerged in the last few decades.

Putin said that Russia perceives India as a great power, a friendly nation, and a time-tested friend.

“The relations between our nations are growing and I am looking into the future,” said the Russian President.

Putin also expressed concern over the situation in Afghanistan, and termed “fight against terrorism, drug trafficking and organised crime” as the key challenges on which both the countries will have to cooperate.

“We continue to cooperate jointly on a global agenda. Our positions are quite similar in the fight against terrorism, drug trafficking and organised crime,” Putin said.

“It is natural that we’re concerned about the developments in Afghanistan,” Putin said in his opening remarks.

Earlier in the day, Indian External Affairs Minister S. Jaishankar and Defence Minister Rajnath Singh had their Russian counterparts Sergey Lavrov and General Sergey Shoigu, respectively. They discussed key bilateral, regional and international issues, including the situation in Afghanistan after the Taliban takeover.