Monkey guards infant trapped in net for 15-hr in Odisha 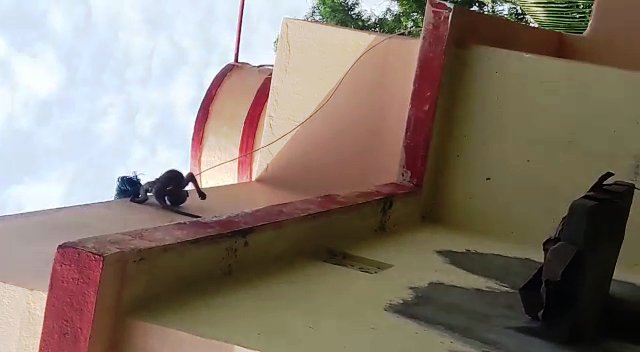 Nimapara: A troop numbered around 15 refused to budge after one of its youngest members was trapped in a net fitted atop a building to ward off the rogues in Odisha’s Nimapara town in Puri district.

A resident of the town famous for syrupy sweets – Kashinath Behera – had put nylon net around a television antenna to protect it from damage as monkeys often break the outdoor signal reception unit when they land on it during their quest for food.

On Thursday afternoon, the barrel went helter-skelter as an infant unsuspectingly fell into the dragnet owing which which the group guarded the young till it was freed from the trouble.

Locals couldn’t dare to free the trapped ape as the elders were furious. Following the pell-mell, a rescue team of Forest department was called in.

After a struggle of nearly 15 hours, the baby monkey was disentangled and released.

The furious monkey was offered fruits to divert her attention. However, she was clever enough not to fall into the trap.

“We moved ahead very cautiously to rescue the baby monkey. We had to take utmost care while cutting the net with the help of scissors. The monkey was freed and dropped at a place where the mother monkey swooped to fetch her baby,” Subhendu Mallick, member of the rescue team narrated.