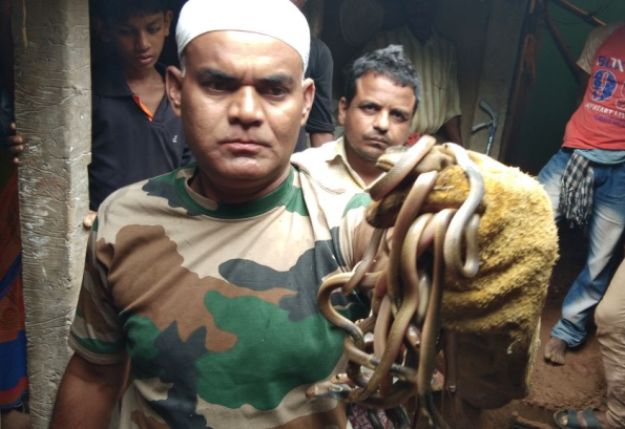 Bhadrak/Kendrapara: Amidst several reports on rescue of snake hatchlings by the snake helpline members across Odisha in the past three days, more baby cobras were rescued from different parts in coastal districts of Kendrapara and Bhadrak here today.

Such incident once again reported from Bhadrak district where 126 baby cobras and three adult cobras were rescued on Saturday and Sunday respectively from a same house.

This time, 19 cobra hatchlings and 21 eggs were rescued by the snake helpline member from a house in Nalanga village under Gelapur panchayat today.

The locals rushed to the site to see the rescue operation.

Similar incident was also reported from Narilo village of Chakrada area in Kendrapara district where 20 baby cobras were rescued from a house of a resident in the morning.

According to reports, the resident Ranjit Swain informed the snake helpline member after he found some snake hatchlings were moving near his house.

The snake catcher started digging out some portion of wall of the house and found as many as 20 baby cobras.

Later, the snake hatchlings were released into the forest.

Ten more cobras were recovered from a house in Kantabania village in Dhamnagar NAC on June 25.

As many as 12 cobra hatchlings were rescued from a house of Anadi Sahu in Suhagpur village under Pipili block of Puri district next day on Tuesday.