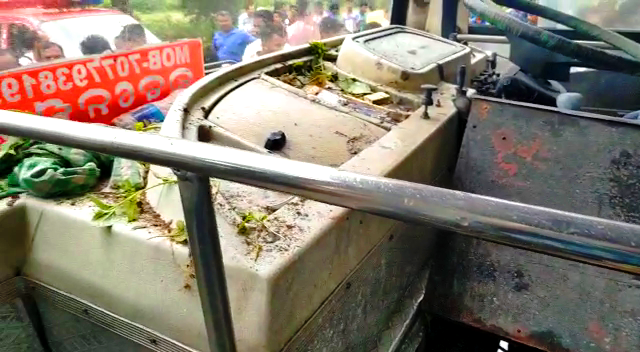 Nabarangpur: A bus en-route to Jeypore of Koraput district caught fire near Circuit House here today.  A major mishap was averted as no injury or casualty was  reported in the mishap.

Reportedly, a private bus ‘Chakadola’ was going to Jeypore from Bhubaneswar, when a fire erupted in the engine of the bus. Fortunately, the passengers quickly vacated the bus before the fire spread.

Though the exact cause of the fire is yet to be ascertained, short circuit is suspected to have led to the mishap.

Earlier on August 28, another bus bearing the same name that plies to Kalahandi from Bhubaneswar was completely gutted after a major fire broke out inside it while it was parked at the Baramunda depot.

Brokers on prowl: 4 arrested from Capital Hospital in Odisha capital