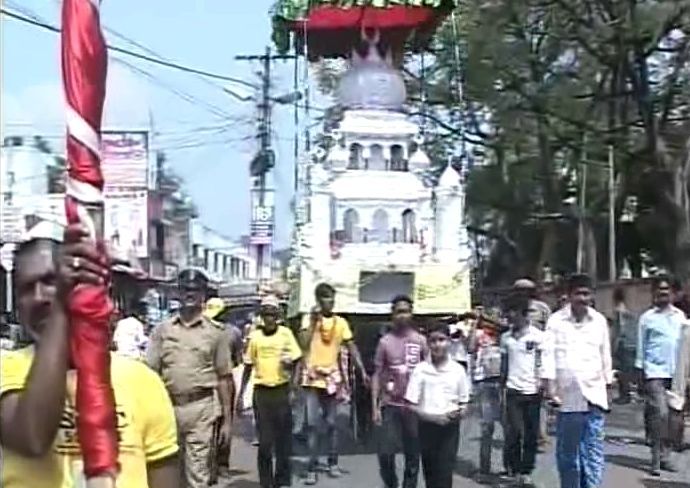 Members of Muslim community today took out mourning processions (Tajia) across Odisha as Muharram was observed in remembrance of the sacrifice of Hazrat Imam Husain.

The day was observed amidst a gloomy atmosphere as Tazias were taken in huge processions and later buried at Karbalas of various places.

The processions were especially noticeable in Bhadrak, Cuttack, Balasore, Jatni, Bhubaneswar and Soro where thousands of Muslims took part in processions and the Matam (chest beating). In Bhadrak alone, as many as 41 Tazias were taken out.

In Cuttack, Muharram was observed at Dargha Bazaar, Tala Telenga Bazaar, Pension Lane and Sutahat. Hindu mourners were also seen accompanying these processions at several places including Cuttack. The processions passed through their routes and culminated peacefully in the evening.

Interestingly, in Sambalpur’s Modipada, the Tazia procession was taken out by Rajendra Padhihari, a Hindu by religion. Many other Hindu followers were also seen accompanying the procession. Traditional stick fight and martial arts were the big draw during the procession.

“This is a 400 year old tradition here. Besides, there are no Muslim families in here. All are Hindus. This is a big day for us and we will continue to observe it,” said Padhihari.

Some of the mourners were seen flagging themselves while many others attempted to inflict self-injury with sharp weapons in remembrance of the martyrdom of Imam Husain. The women were seen beating their chest to express their grief and solemnity.

Heavy security arrangements were made at all places to avoid any untoward incident as the festival clashed with the immersion ceremony of Dussehra. The routes of processions were closed and cops were deployed along the routes at most places.

It may be noted that the day marks the martyrdom of Hazrat Imam Husain, the grandson of Prophet Muhammad and his 71 companions, who laid down their lives in the battle of Karbala for upholding truth, righteousness and justice.