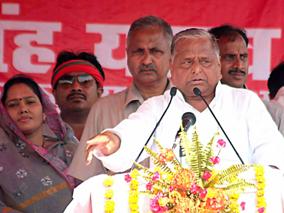 Samajwadi Party chief Mulayam Singh Yadav on Friday said the party’s legislators after the Uttar Pradesh elections will pick the new Chief Minister, in a clear indication that his son and incumbent Akhilesh won’t be the face of the party in the polls.

“The elected legislators and the Samajwadi Party’s Parliamentary Board will pick the next Chief Minister,” he told the media here.

This would mean that unlike in 2012, when the Samajwadi Party swept the assembly polls, the party won’t portray the young Akhilesh as its Chief Ministerial candidate.

The 76-year-old former UP Chief Minister denied there was strife within his family.

“We have always been united for three generations. How can we have differences now?” he asked.

Saying there was no bickering within, he held the hand of Shivpal Yadav, who he said was everything for the Samajwadi Party.

He also praised Transport Minister Gayatri Prajapati, who was sacked by Akhilesh Yadav and then reinstated at the intervention of Mulayam Singh, saying a man from humble background like Gayatri was also a minister due to “the miracles of the Samajwadi ethos and ideology”.

In an apparent response to Akhilesh Yadav’s statement that he had pedalled over one lakh km on cycle to make the party stronger and many leaders of the Youth Brigade (now expelled) had worked hard for the party, Mulayam Singh said the party was where it was because of him (Mulayam).

Mulayam Singh announced that the Samajwadi Party would hold a grand event on November 5 to mark 25 years of its existence.

Until now, Akhilesh Yadav, despite the power struggle with his uncle Shivpal Yadav, has exuded confidence that he would again be the Samajwadi Party’s Chief Ministerial face.

Uttar Pradesh goes to the polls early next year.

Akhilesh Yadav had earlier told a journalist that all was not well in the Yadav family and that he would go it alone in the election campaign soon.

Mulayam Singh also said that there should be no politics on a Uniform Civil Code and people should be free to follow any religion in the manner they want. (IANS)

Blanket ban on Chinese goods not a feasible option: Sitharaman

Take all into confidence on Uniform Civil Code: Congress