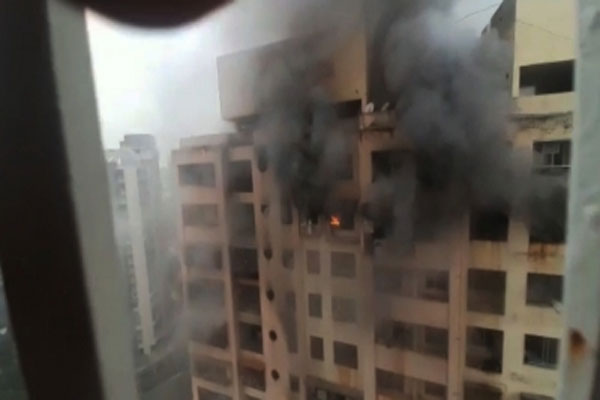 Mumbai: At least 6 persons have been killed and 23 others injured when a major blaze engulfed the 18th floor of a building in Tardeo, South Mumbai at dawn on Saturday, the BMC Disaster Control said.

The fire was noticed at the top part of the 20-storied Kamla Building at around 7.30 a.m. with people in neighbouring buildings and morning walkers alerting the fire brigade.

The Mumbai Fire Brigade (MFB) rushed with 13 fire tenders as the flames quickly spread to the two upper floors sparking panic among the building residents.

The MFB managed to rescue at least 23 injured persons from the inferno that raged in the top three floors, and the firemen continued to battle the blaze in the afternoon.

The injured persons were rushed to various private and public hospitals and 7 were given first aid and allowed to go.

The remaining 16 with grievous burns of various degrees, have been admitted to different hospitals.

Mumbai Mayor Kishori Pednekar and other top BMC officials rushed to the spot to supervise the rescue and relief operations, and the cause of the fire is being probed.

After the two fatalities earlier, another 4 critically injured persons succumbed to their burns in the next few hours, and another 5 are still critical, said the BMC Disaster Control.

The dead victims have been identified as Purushottam Chopdekar, Manju Kantharia, Hitesh Mistry and the identity of 3 including 2 women is yet to be ascertained.

The BMC has ordered a probe into the causes of the fire catching many in the building unawares, whether the society had adequate fire warning/fighting facilities, etc, said an official.

Bharatiya Janata Party Leader of Opposition Devendra Fadnavis condoled the deaths and said he was shocked to learn that some nearby hospitals refused to admit the injured leading to a spike in the deaths.

“If this is true, then the state government and BMC must fix the responsibility for the deaths and take action against those responsible,” demanded Fadnavis.