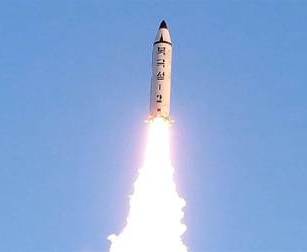 Tokyo: North Korea on Tuesday fired a missile over Japan which Prime Minister Shinzo Abe has called the “most serious and grave ever” threat to the country, the media reported.

The missile was fired just before 6 a.m. in Japan. The launch set off warnings in the northern part of the country urging people to seek shelter, reports CNN.

It flew over Erimomisaki, on the northern island of Hokkaido, and broke into three pieces before falling into the Pacific Ocean, about 1,180 km off the Japanese coast.

The missile was in flight for about 14 minutes, Chief Cabinet Secretary Yoshihide Suga said at an emergency press conference.

“There is no immediate report of the fallen objects and no damage to the ships and aircraft,” he added.

Pentagon spokesman US Army Col. Rob Manning said the launch did not pose an immediate threat to North America.

Prime Minister Abe condemned the launch as a “reckless act.”

“We have fully grasped the movement of the missile immediately after their launch and have been taking every possible effort to protect the lives of people,” he said, adding “It is a serious and grave threat which impairs the safety and peace of the region.”

Abe told the media that he had a 40-minute phone call with US President Donald Trump to discuss the missile launch.

The two countries have requested an urgent meeting of the UN Security Council, according to Japan’s ambassador to the UN, Koro Bessho.

South Korea responded by conducting a bombing drill at 9.30 a.m., to test its “capability to destroy the North Korean leadership” in cases of emergency, a Defence Ministry official told CNN.

The operation was meant “to showcase a strong punishment capability against the North”, he said.

Notably, however, it is the the first time the country has successfully fired a missile over Japan since 1998, when it sent a satellite launch vehicle over the country.