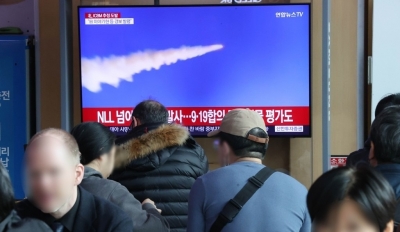 The Joint Chiefs of Staff (JCS) said it detected what is presumed to be a long-range ballistic missile launch from the Sunan area in Pyongyang at around 7.40 a.m. and the firing of two apparent short-range ballistic missiles (SRBMs) from Kaechon in South Pyongan province from 8.39 a.m., reports Yonhap News Agency.

It marks the North’s first firing of an ICBM since May.

The North’s provocations came a day after it shot more than two dozen missiles, the biggest-ever barrage in a single day.

One of them flew southward past the de facto maritime inter-Korean border for the first time since the end of the 1950-53 Korean War.

The North is seen as demonstrating its firepower in protest against this week’s combined air drills of South Korea and the US, involving more than 240 aircraft, amid growing speculation that Pyongyang may conduct a nuclear test soon.

Pyongyang has long denounced joint military drills between Seoul and Washington as a rehearsal for invasion.

The countries stress the exercises are defensive in nature.

Elon Musk to cut half of Twitter’s workforce: Report