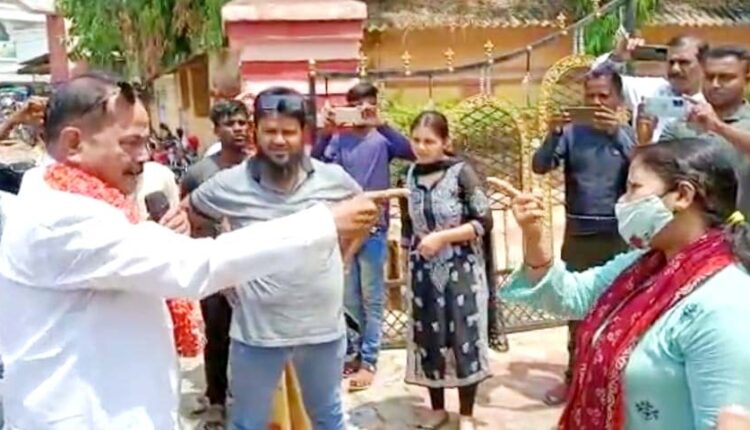 The incident took place when senior Congress leader Bahinipati had joined a dharna staged by the party workers in front of the BDO’s office since yesterday demanding fulfillment of 16 point charter of demands.

As the BDO came out of the office for having lunch, the legislator stopped her and accused her of being involved in corruption. Pointing finger towards her, Bahinipati termed the BDO as a “corrupt officer”.

Mallick soon retaliated by saying that the MLA was a “corrupt politician” by pointing her finger towards him in a similar way.

Tension ran high at the spot as Bahinipati told the BDO not to misbehave with him saying that she has no rights to do so. He also told the BDO to order food for lunch instead of leaving the place without paying attention to the demands of the agitators.

Later, police intervened and took the BDO to her chamber. Bahinipati and the Congress workers then resorted to a dharna demanding action against Mallick.

After more than two hours, Additional Collector Bhaskar Raita reached the spot and held discussion with the BDO, following which she apologised to the MLA at the dharna place.

A meeting was then held between Bahinipati and senior officials of the district administration, including the Collector. After getting assurance regarding fulfillment of the demands within a month, the agitators withdrew the protest.

“The BDO has been threatening the locals to get them arrested on false case of atrocities. She has no idea how to behave with a public representative,” said Bahinipati while speaking to reporters.

On the other hand, the BDO refuted the allegations levelled on her and said the MLA misbehaved with her.

“As he is the MLA of Jeypore, he has no business here. He misbehaved with me and accused me of having involvement in corruption,” she said.

It can be recalled here that Deogarh MLA Subash Chandra Panigrahi was arrested from his official residence in Bhubaneswar on May 1 for allegedly attacking Tileibani BDO, who had accused the legislator of thrashing him and filed an FIR.