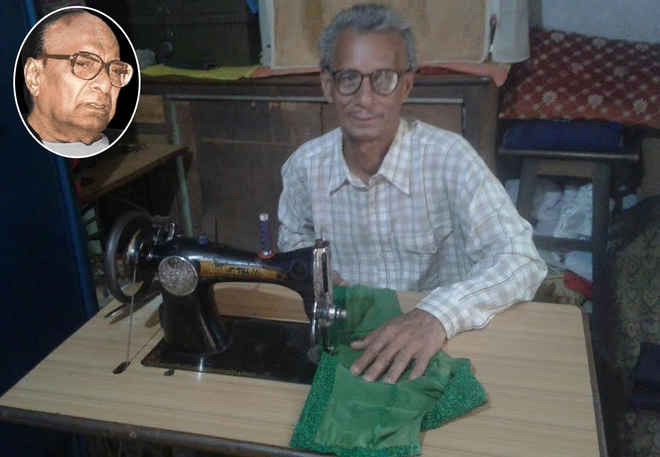 He was six-feet tall with straight forward talk, but I have never seen such a compassionate person anywhere in my life, recalled Subash Padhee, a tailor of legendary Biju Patnaik, who continues to inspire every Odia.

Padhee, who was making Kurtas for brave son of soil Biju Babu for 24 years, remembered the moments that he spent with the great man on the occasion of 20th death anniversary today.

“Arey you know tailoring so well, why the Delhi person will take money? Let my Odia brother take it, Biju Patnaik said after wearing a kurta stitched by me. The words still echoed into my ears”, the 66-year-old Padhee said.

Recalling the days in 1972, he said that he was getting only Rs 25 for stitching a kurta. But, Biju Babu had paid Rs 55 for the kurta saying the same cost the Delhi tailor is taking from him. Since then Padhee was engaged as the tailor of former CM and he had stitched around 700 kurtas and Berhampuri banyans for Biju Babu till 1996.

“His choice was great in wearing the kurta matched with dhoti. Sometimes he called on me while I was working at my uncle’s tailor shop at Market Building in Bhubaneswar. At that time there was no such restriction for entering into CM’s residence. I had entered the house when he called me for the first time. He was sitting on the cane chair, I sat on the floor. Then he told me ‘stand up’. I was scared. Then he ordered Khansama to bring a stool. He asked me to sit on the stool. After I sat on the stool, his words touched my heart. Since that day his door was open for me”, he said adding “Not only for me, he was treating everyone as his own”.

“I have stitched all his kurtas till 1996. The kurtas were special to him”, the old man said.

“My Babu was a very compassionate person. I had taken Rs 5,000 from him for the death rituals of my father and father-in-law. When I went to pay him back the amount, he scolded me severely. He told me that he had not given the money as loan”, Padhee said.

Born in Ganjam district, Subash Padhee was not only the desired tailor of Biju Babu, he had also stitched for the former chief ministers including Biswanath Das, Nandini Satapthy and Binayak Acharya.

The childless old man lives in a three-room house at Bhima Tangi area. He earns his bread and butter by stitching the clothes for his neighbours after his shop was destroyed.

Earlier, he had requested many seeking an allotment of shop at Market Building. Even he had approached former Prime Minister Rajeev Gandhi in this regard, but his efforts went in vain. Without having any option, he is living with over 30 letters that he had kept with him. However, nobody listens to his silent cries.

“The present CM Naveen Patnaik is wearing his father’s kurtas, stitched by me”, he said with tearful eyes.