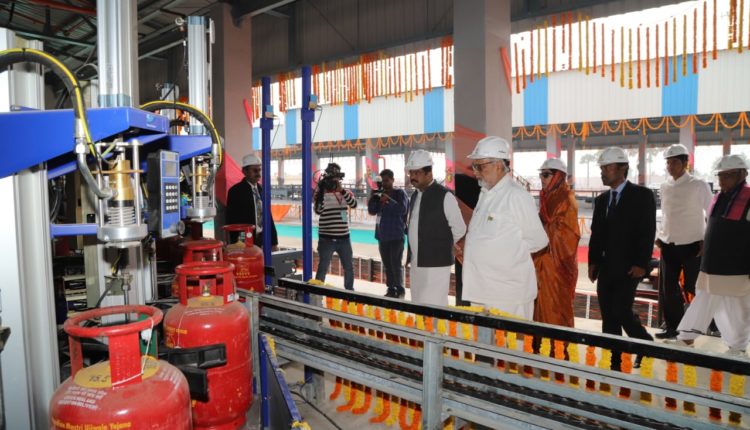 The vice president, who was scheduled to inaugurate the facility, could not reach here due to inclement weather at Raipur in Chhattisgarh.

In a voice message, Naidu wished success for the project located at Barkhani village in the western Odisha district.

Set up at a cost of Rs 103 crore by Bharat Petroleum Corporation Limited (BPCL), the facility has a capacity to fill 42 lakh cylinders per year.

“I am happy that the new LPG bottling plant has come up in Bolangir. It will help women and provide employment to the local youths. Though I am unable to reach Bolangir due to inclement weather, I wish the project a great success,” Naidu said in a voice message which was played at the meeting venue.

The LPG bottling plant was commissioned three months ahead of schedule.

Speaking on the occasion, the governor said, “The new bottling plant by BPCL will fulfill the needs of the people in 14 districts in western region of the state. The plant is part of the Government of India’s East development policy.”

Dharmendra Pradhan, who had laid foundation stone of the plant in May 2018, said, “Providing clean cooking fuel to the people is our main objective.”

Noting that the NDA government has successfully provided cooking gas to the people, Pradhan pointed out that while the total number of LPG consumers till 2014 was only 13 crore, the number has increased to 27 crore in a span of five years.

The union minister said that the number of LPG consumers in Odisha has increased to 80 lakh from just 22 lakh prior to 2014.

“As there has been an increase in the consumer base, we felt the need of setting up more LPG bottling plants to meet the demand. The new bottling plant at Bolangir is part of the Centres effort to ensure easy availability of gas cylinders,” Pradhan said.

The Bolangir plant is the second LPG bottling plant of BPCL to be operational in the state after such a facility in Khurda, said Sanjay Sharma, BPCL state head LPG (Odisha and Jharkhand).

Officials said, the BPCL has 21.59 lakh customers in the state.