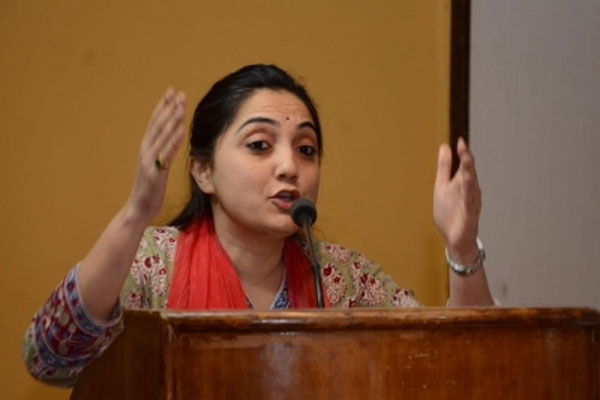 New Delhi: The Supreme Court on Friday slammed former BJP spokesperson Nupur Sharma for her remarks on Prophet Muhammad during a TV debate.

The top court said her loose tongue has set the entire country on fire and the outcome is the unfortunate incident which happened at Udaipur.

A vacation bench comprising Justices Surya Kant and J.B. Pardiwala minced no words in criticising Sharma for making irresponsible remarks and castigated her for her arrogance. Citing her remarks, the bench said, “It is so disturbing… the outcome is what happened at Udaipur… please do not compel us to open our mouth”, the bench told Sharma’s lawyer.

The bench said she should apologise to the nation for her irresponsible comments.

Sharma had moved the top court seeking transfer of several FIRs, registered against her in many states for alleged remarks to Delhi for investigation. Sharma contended she is constantly facing life threats from unsocial elements despite withdrawing her comments.

The bench made it crystal clear to her lawyer, senior advocate Maninder Singh, that it is not keen on entertaining her plea. “When you lodge a complaint against someone that person is arrested but nobody dares to touch you…That shows your clout,” said the bench.

Referring to her apology and withdrawal of comments on the Prophet, the bench told her counsel that it was too late in the day to withdraw and her irresponsible comments have set the entire country on fire. The bench reiterated that on her complaint a person is arrested, but despite multiple FIRs she has not yet been touched so far by the police, rather a red carpet is laid for her.

The bench told Singh that this kind of people are not religious as all religious people respect every religion.

Singh submitted that she tendered an apology immediately, and cited various top court judgments where clubbing of multiple FIRs was ordered for the same alleged offence. However, Singh could not convince the bench and withdrew the plea from the top court.

The bench told Singh her statement is singularly responsible for igniting the country, and asked if she faces threat or she has given threat to the nation?