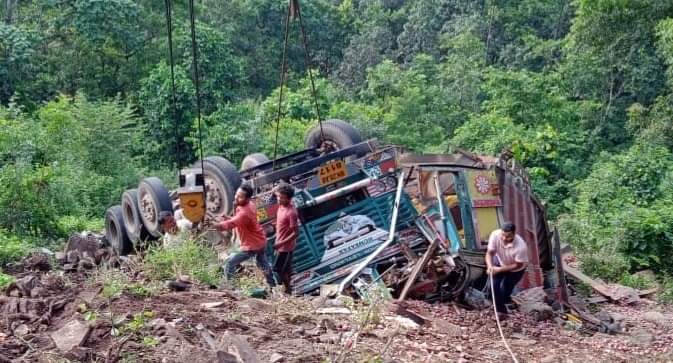 Baripada: In an unfortunate incident, two persons were killed and another suffered critical injuries after an onion-laden truck plunged into a 100-feet deep gorge near Bangiriposhi on NH-49 in Mayurbhanj district today.

All three of them were residents of Malkapur in Maharashtra.

2 including female constable dead, 1 critical as motorcycle rams into truck

Reportedly, a truck, after loading onions from Nashik, was en-route to West Bengal. The mishap took place this morning when the driver lost control over the vehicle while crossing Bangiriposhi Ghati and the truck fell 100 feet down. While truck helper Wasim jumped off the vehicle to save his life when the vehicle was falling down, driver Yunus and his friend Jawal died in the mishap.

On receiving information, locals along with a firefighting team reached the spot and rushed all of them to a hospital in Bangiriposhi. While Yunus and Jawal were declared dead by the doctors, Wasim was undergoing treatment in critical condition.

Rs 10,000 fine to be imposed on banks for non-availability of cash in ATMs