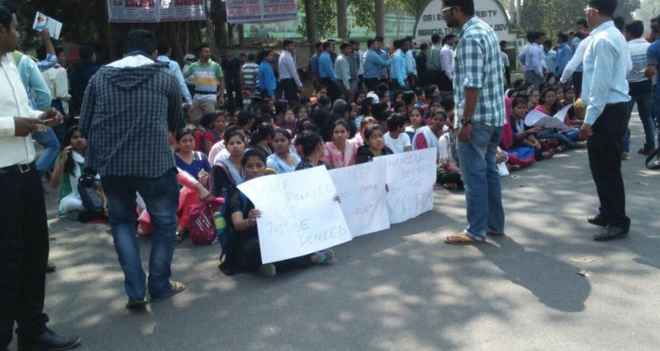 According to reports, Suchismita Biswal, who was pursuing her Master of Computer Application (MCA) under the Centre for Post-Graduate Studies (CPGS) in the university, died after being hit by a Tata Safari SUV on Siripur-Fire Station road on Saturday night.

One of her friends identified as Pragyna Tiwari sustained injuries in the accident and is undergoing treatment in hospital.

While police seized the vehicle, the driver managed to flee the spot after the accident.

Demanding arrest of the driver of the car and compensation for the family of the deceased, OUAT students today blocked road at Siripur Square affecting vehicular movement for a while.

The students have alleged that the car belongs to kin of MLA Debashish Samantray.

“A Tata Safari car hit two of our girl students on Saturday night killing one of them and injuring the other. We have the footage of the vehicle whose registration number later revealed that the car belongs to the owner of Siddarth Construction who happens to be MLA Debashish Samantray’s brother and the legislator’s son was driving the vehicle on that night,” alleged an agitating student.

The blockade was later lifted after police officials assured them of fulfilment of their demands.

Later in the day, police conducted raid at Siddarth Construction office and examined the papers of the vehicle. A notice was also served to the firm to furnish details of the concerned vehicle by 10 am tomorrow.

Contractor attempts suicide over nonpayment of dues in Odisha