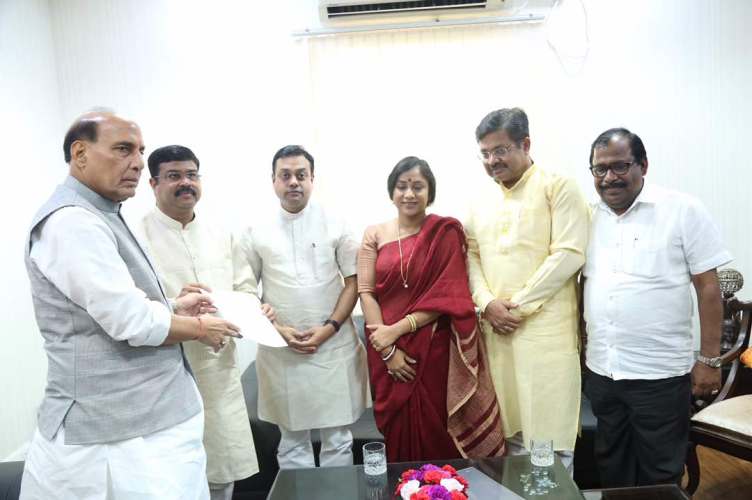 The team handed over a memorandum to Rajnath Singh urging him to ensure safety and security to Parbati, who was allegedly manhandled by ruling party Biju Janata Dal (BJD) goons in Odisha.

In the memorandum, the BJP alleged BJD goons of beating Parbati, who dared to submit a letter to Prime Minister Narendra Modi over harrassment meted out to her during a road show on April 15 on the inaugural day of BJP National Executive Meeting at Bhubaneswar.

Parbati under Erasama police station limits in Jagatsinghpur district was attacked by BJD supporters for voting for BJP in the recently concluded Panchayat elections in Odisha. Even, police did not take action against the culprits, the BJP leaders alleged.

Drawing the attention of Rajnath, the team said that the poor woman, who manages her family by rearing goat, had filed an FIR in the police station. Neither action was taken against the goons on the basis of the complaint, nor did she get police protection. Rather, the BJD supporters mocked her while she approached PM Modi.

Again Parbati along with few other women was attacked by the BJD goons after she returned to her village for handing over the letter to PM Modi during the road show in Bhubaneswar, they alleged.

Despite several appeals and requests, police did nothing except interrogating the victim and other others and threatening to buy peace with compromise, the saffron party said.

She was attacked again for daring to submit a petition to Hon’ble PM during his visit to the state on 15th April to attend the BJP NE Meet.

On the one hand BJD Govt is responsible to compromise the safety of a lady & on the oth BJD party has encroached upon her democratic rights.

State Sponsored Violence to crush the political rise of BJP in Odisha is a no lesser concern than the Collapsed Administration & Governance. pic.twitter.com/VggYRTOZn4

Determination of People of Odisha to oust the corrupt, inefficient & anti-people BJD Govt will be further strengthened by these unruly acts. pic.twitter.com/KWBVTXS3dV

For the fear of loosing his seat @Naveen_Odisha has forgotten his constitutional duty to protect people regardless of their political views.

After 5 years for Baahubali, Prabhas to focus on two Telugu projects