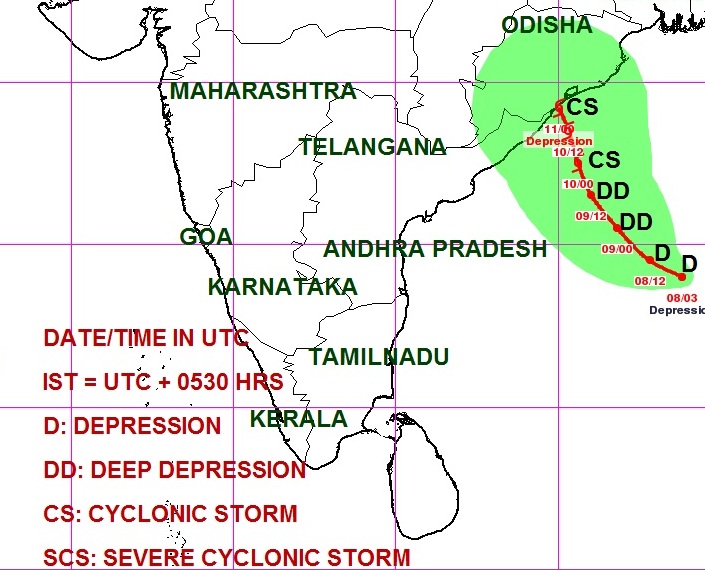 Bhubaneswar: The deep depression over Bay of Bengal is very likely to intensify into a Cyclonic Storm during the next 24 hours and trigger heavy rainfall and squally winds across Odisha.

“The deep depression over eastcentral Bay of Bengal moved further west-northwestwards with a speed of about 11 kmph in last 03 hours, at 0230 hrs IST, 9th October 2018 near latitude 14.6°N and longitude 87.3°E, about 570 km southeast of Gopalpur (Odisha) and 530 km southeast of Kalingapatnam (Andhra Pradesh). It is very likely to intensify into a Cyclonic Storm during next 24 hours,” a bulletin of the India Meteorological Department (IMD) said.

It is very likely to move west-northwestwards for some more time and then northwestwards towards Odisha & adjoining north Andhra Pradesh coasts during next 72 hours, the bulletin added.

On the other hand, the Odisha government has directed District Collectors to remain alert over the likely formation of a cyclonic storm over the Bay of Bengal by October 10. The office of the Special Relief Commissioner (SRC) wrote to all District Collectors to keep the official machinery in full preparedness to meet any eventuality.

“In view of the cyclone forecast, please alert all concerned and keep the administrative machinery in full preparedness to meet any eventuality. All officers to remain in headquarters and not to avail of leave till the cyclone situation is over,” said the letter.

10 things to know about Gopabandhu Das on his birth anniversary