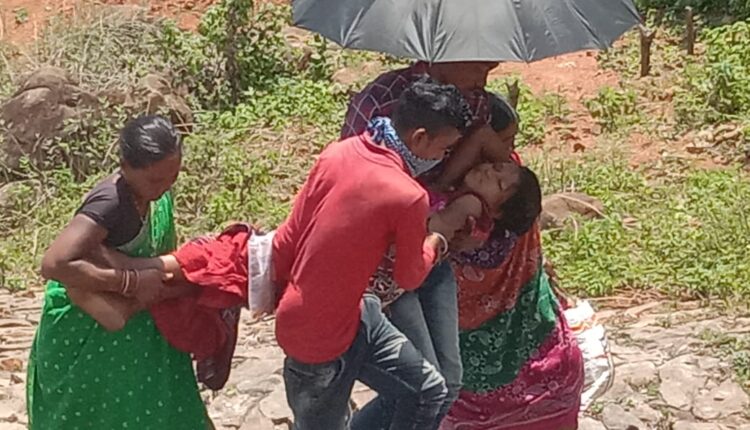 Bhubaneswar: Stepping beyond their mandated duty responsibilities, troops of India’s border guarding force BSF saved the life of an ailing woman in Maoist-hit Malkangiri district in Odisha by facilitating ambulance and other necessary services to get her hospitalised around 75 kms away at the district hospital.

It was 11 a.m. on Saturday when the Border Security Force (BSF) troops deployed at Company Operation Base (COB) Dyke-III dam got inputs about the ailing woman being taken out from a motorboat in unconscious condition. Dyke-III is a construction project for creating a reservoir in Balimela– a Power Plant and irrigation project.

The personnel of 144 Battalion deputed at the COB Dyke-III observed the motorboat arriving at the ferry point of Dyke-III dam. One Purnima Hantal, a resident of village Dandar beda in Jodambo area, was in an unconscious state when the BSF personnel saw her. The woman was accompanied by one Accredited Social Health Activist (ASHA) worker of Anganwadi named Tula Khillo and her relatives in the boat.

Reacting quickly to the situation, the BSF troops immediately send out an emergency call for Ambulance assistance and the patient was evacuated to a district hospital in Malkangiri around 11.40 a.m., BSF PRO Krishna Rao told IANS. The district hospital is around 75 kms from Dyke-III dam, said the official.

The BSF team also provided essential items like mosquito net, bed sheet, hand towel and cotton cloths to the patient, he added. As the patient’s family members and the ASHA worker had no mobile phone to connect with authorities to get ambulance service, the BSF took the initiative to help them out. Another BSF official told IANS that the woman had a serious health issued as she had given birth to a baby two days ago and she needed urgent medication.

As the area touches Andhra Pradesh, it is a Maoist-affected belt and is known as cutoff area.

With a strength of over 2.60 lakh personnel, the BSF is mandated to guard 4,096 km India-Bangladesh and 3,323 km India-Pakistan borders. Besides, the force is deputed in various Maoist-hit areas.