The sorry state of affairs was reported from Hingula Government High School near Antia village under Dharmagarh block of the district, which had been upgraded under the 5T initiative in November last year. 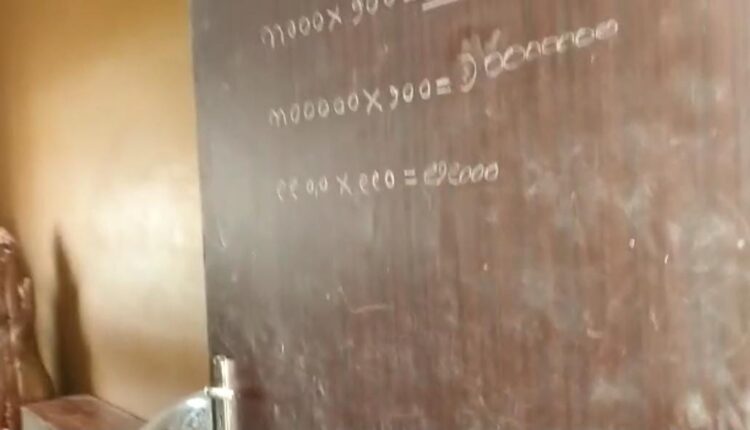 Chadeidhara/Jajpur: Tall claims of upgrading schools under the State government’s 5T transformation programme seem to have fallen flat after video went viral of a teacher writing questions on the classroom door in the absence of a blackboard in one such school in Jajpur district of Odisha.

The sorry state of affairs was reported from Hingula Government High School near Antia village under Dharmagarh block of the district, which had been upgraded under the 5T initiative in November last year.

In the clip that is doing rounds, questions were seen written on the door of Class V of the school sans a blackboard. Students, when asked, said this has been a regular affair for them.

As per reports, the issue came to the fore during conduct of exams of Class I-VIII in the school on Monday. While students arrived at the school as per the scheduled timings, they could not take the exam as question papers were reportedly not given to them. Sources said they were only given answer sheets. When the news spread, parents, guardians and members of the school management committee reached the spot and questioned the irregularity. While a heated exchange between headmistress Saraswati Panda and the management committee members ensued, one of the guardians Debendra Maharana alleged that the exam was delayed as the school lacked basic infrastructure. “Around 500 students including my children study in this school. But the entire building does even have a blackboard. At last, questions had to be written on the classroom door. Such is the state of this so-called transformed school,” he stated.

One of the teachers Shatrughan Barik, on being asked, confessed that it is true that classroom door was being used for writing questions for the exam as they did not have blackboards.

Interestingly, the school is only about 10 km from the block headquarters. Meanwhile, the incident has sparked outrage among locals with parents and guardians questioning the whole point of Government spending so much money on the school transformation scheme where despite all efforts, students are being made to take exams in such a manner.