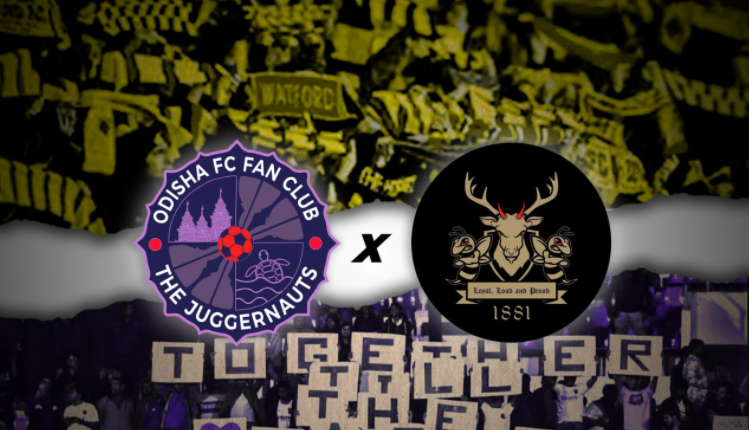 ‘The Juggernauts’ are the first football fan group in India to get into an international alliance with supporters of a foreign club.

The partnership comes in the wake of Odisha FC penning a three-year international partnership with the English club that would see Watford help develop the football ecosystem in the Indian state.

‘The Juggernauts’ is the official fan army of Odisha FC which came into existence in September 2019. The group consists of students, doctors, lawyers, engineers, consultants, homemakers, teachers, musicians and others from nearly every strata of society; united unanimously to pledge their allegiance for their state’s own football club and for the general development of the football ecosystem in the state.

‘The Juggernauts’ announced their presence right from the first interaction with OFC when the then coach Josep Gombau arrived to grand fanfare at the Bhubaneswar airport which translated on to numerous jam-packed matches at the Serajuddin Stand of Kalinga Stadium. With chants of their own, snares and acoustics and boosting the morale of the team, the fan army became the twelfth man and backed the newly shifted team at the home stadium which contributed immensely towards OFC maintaining a staggering 85% unbeaten record at the Kalinga.

Off the pitch, the fans realised their social responsibilities and initiated several community building campaigns such as the Women Empowerment drive with 50+ female footballers, standing in solidarity with the LGBTQ+ community and voicing for an indiscriminate society, cleanliness sessions at the stadiums post the completion of matches, mega tree plantation and preservation drive commemorating the anniversary of Odisha FC’s inception, organising zonal Futsal tournaments in the cities of Bhubaneswar and Cuttack, conducting a unique mega Cyclothon event called the Tour de Ekamra with multiple corporate sponsors and 750+ cyclists, and topping the list with the first ever Beach Soccer in Odisha held at Puri which would continue its legacy along the 500km coastline of Odisha.