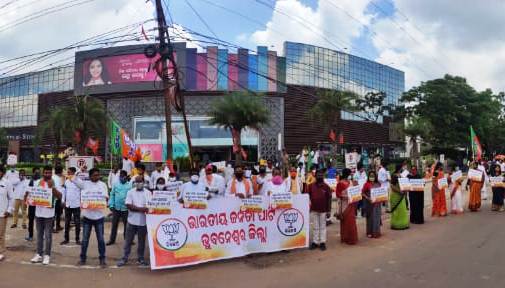 “As per government order, any kind of congregation and gathering of more than 7 persons are prohibited. For this, BMC has lodged complaints/FIR against the demonstrators for appropriate legal action,” BMC Commissioner PC Choudhary said.

“About 150 persons belonging to a particular political party had gathered in front of Utkal Kanika Galeria, near Kalpana Square to protest against the shopping mall. It appeared that except for a short period of time, the whole of the congregation was found to be violating social distancing norm,” BMC said in the FIR.

Besides, FIR against two social activists – Pradeep Pradhan and Srikant Patra among others – has been filed at Capital Police Station for demonstration in front of Congress Bhawan near Master Canteen Square.

Similarly, FIR against members of Naba Nirman Krushan Sangathan, President of Youth Congress Smrutiranjan Lenka and others, Left leaders Janardan Pati, Narayan Reddy and others have been filed at Nayapally, Capital, Badagada and Kharavela police stations.

FIRs have been registered under several sections of IPC and Epidemic Diseases ACT, 1897.