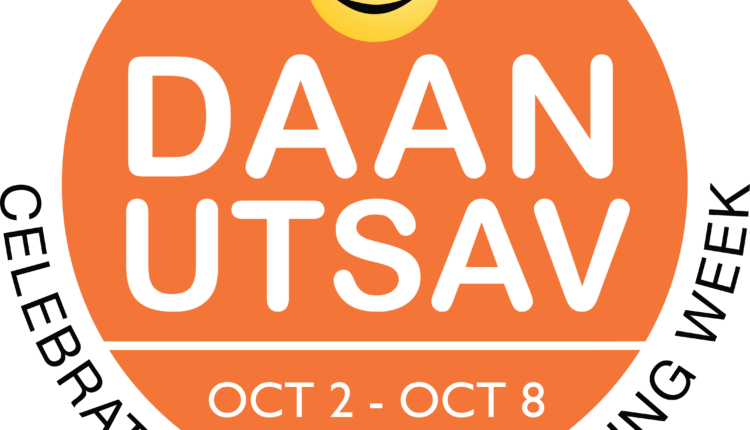 Bhubaneswar: Baara Masha, Tera Parba. Odisha is the land of festivals. We have made all the major national festivals our own. Ganesh Puja might have started as a big public event in Maharashtra, but it is a popular festival in Odisha today. Durga Puja might be biggest in West Bengal, but its an important festival in Odisha as well. There is another festival that started only in 2009 has become hugely popular across India with more than 1500 events happening every year in more than 200 places. This is the Daan Utsav, the national festival of giving, which is on its way to be an established festival in the Indian calendar like Diwali, Eid or Durga Puja. This festival celebrated every year from 2nd to 8th October, is increasingly becoming an established festival in Odisha as well.

The attempt to convert the cultural practice of giving into a major festival to promote the culture and to inspire, motivate and create opportunities for millions to give, has no organization behind it, just as there is no organization behind any of the other festivals. It is the work of committed individuals, who volunteer their time, ideas and energies and most importantly, the millions, who have promoted the festival through their giving.

The rich and the poor, people in cities and villages, individuals with families and friends or institutions and associations such as apartments, schools, colleges, NGOs, corporates etc have been celebrating giving or mobilizing giving in the form of funds, material or service and in many creative ways.

Monalisha Mohanty reached out to all the families in her apartment of 60 houses and collected ornaments. This was gifted to the families of sweepers, gardeners, guards and maids of their apartment. They also cooked food for them and organized a cultural programme as well. They have been celebrating Daan Utsav every year.

Many schools have been celebrating Daan Utsav by collecting clothes, toys and books and giving to NGOs such as Bakul Foundation or directly distributing in slums or orphanages. Students of Kazi Bazar High School in Cuttack went a step further and addressed the problem of ostracism of leprosy patients in front of Chandi Mandir and brought joy through their act of giving.

Many NGOs celebrate this festival either to mobilize giving from people and to give. For instance, Bakul Foundation has been creating opportunities for young people to experience the joy of volunteering by going in groups to slums, orphanages and old age homes in the Day of Service on 2nd October and spread joy through fun learning activities. Bakul has also organized many book collection drives and set up many libraries in this festival.

The beauty of this festival is that anyone can give and in any way they wish. For instance, the Auto Mahasangh in Bhubaneswar felt inspired and took 80 elderly and infirm people from the city slums to Puri for a darshan of Lord Jagannath in 2012. There have been rural Seva Mahotsavs in Badamba, Daspalla, Narsinghpur and most regularly at Badbaarsingh village in Badamba in which every villager gives what they can and they set up different stalls distributing clothes, stationery, shoes, food and medicines for free. It started in Badamba, and has then spread to the nearby areas is truly becoming a festival celebrated for all.

Woman gives birth to four babies at VIMSAR in Odisha