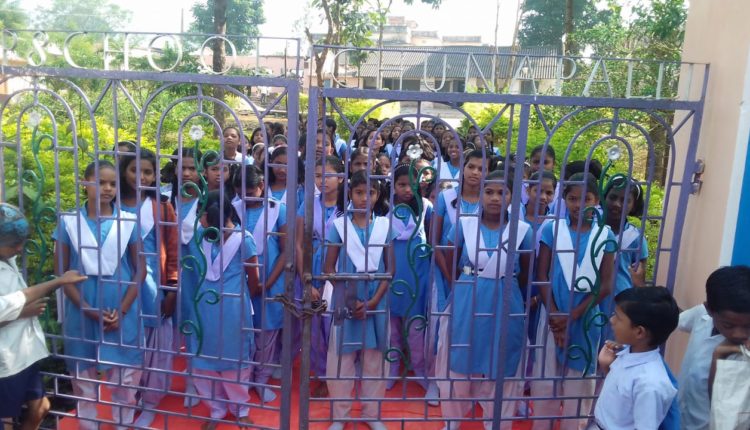 Kandhamal: A group of girl students of an upper primary school in tribal-dominated Kandhamal district in Odisha today locked up the main gate and sat on a dharna demanding action against two women teachers.

Around 160 girl students of Kasturba Project Upper Primary School, under Raikia block in the district, residing in the school’s hostel resorted to protest after their repeated pleas went unheard. The students alleged that two of the women teachers beat them up as punishment for minor faults.

A girl student stated that the two teachers thrashed them on several occasions. Earlier this September, the assaulted girl students had complained to  school Headmistress Snigdha Priyadarshini Parida seeking stern action against the duo. On September 16, senior officials of the Education department had visited the school for inquiry. However, they did not take any action against them, the students alleged.

After being denied justice, the aggrieved students once again sat on a dharna. Later, ADO, BDO and BEO intervened into the matter and assured action against the erring teachers owing which the students withdrew their agitation. The officials reportedly assured the students to transfer the two teachers.

Protesting against the assurances being not fulfilled, the students once again launched their agitation today.

Robert Pattinson trains in jiu-jitsu for ‘The Batman’ role