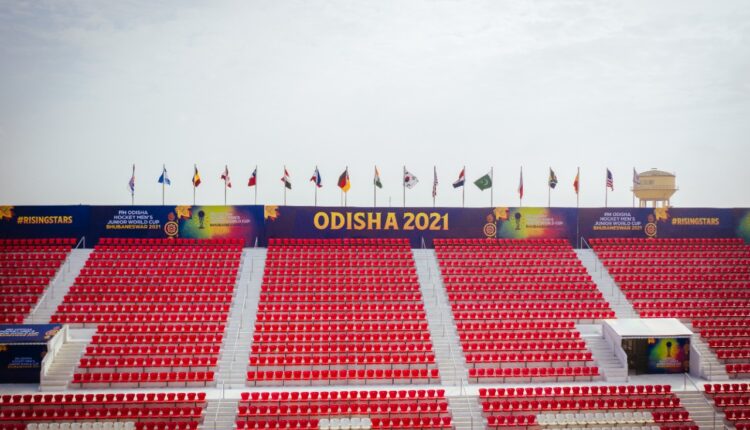 Bhubaneswar: The FIH Odisha Hockey Men’s Junior World Cup 2021 will kick off at the Kalinga Stadium here from today.

Hosts Odisha in association with Hockey India +have put all required preparations in place for all 16 participating teams including Pakistan, which are camping in Bhubaneswar city and getting ready to battle it out for top honours in the tournament. The players and team officials are being hosted in a bio-secure bubble given the Covid-19 situation.

The Bhubaneswar-Cuttack Police Commissionerate has made elaborate security arrangements for the mega sporting event while Bhubaneswar Municipal Corporation (BMC) and Bhubaneswar Development Authority (BDA) have decorated the city.

Police commissioner Soumendra Priyadarshi said that five ASPs, eight DSPs, 26 Inspectors, 72 Officers, 30 Havildars, and around 20 platoons have been deployed for the event.

The cops will remain present at the gates and internal periphery of the stadium as well as on the ground and they have been briefed about the players’ security, he said.

As no spectators will be allowed into the stadium to witness the matches, there is no pressure on traffic arrangements, said Priyadarshi.

Speaking about arrangements made for the teams at their places of stay, the police commissioner said, “The security of foreign teams especially Pakistan is at our top priority. Police escort is being provided to the players starting from their arrival at the airport to their hotels and the stadium.”

Besides, adequate police personnel are deployed at the hotels, where the players are staying, he stated.

“I believe that the event will be a success as Bhubaneswar police have experience in providing security arrangements during the World Cup, Champions Trophy, and FIH Hockey Pro League,” the commissioner said.

Similarly, BMC commissioner Sanjay Singh said the corporation is looking after sanitization at the stadium and also other places.

The city walls have been decked up with paintings while colourful lights have been put on major streets.

All the participants including team officials are being subjected to mandatory Covid-19 tests every 72 hours.

However, there is indeed disappointment among the hockey lovers, as the event will not have any spectators due to the Covid-19 pandemic.