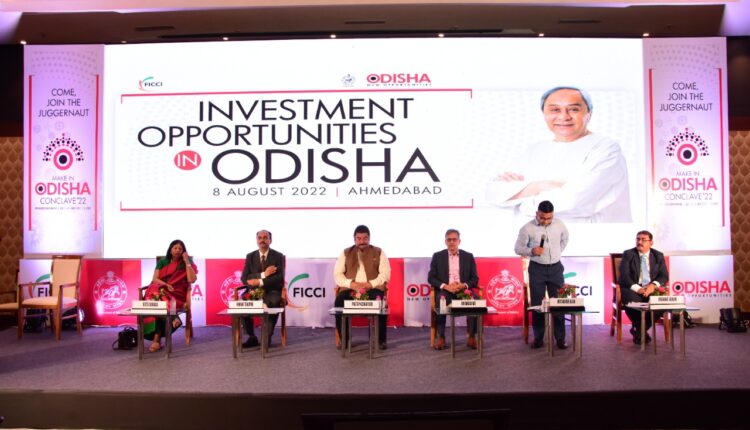 Bhubaneswar: In a continuous effort to be the country’s leading investment destination, the Government of Odisha, in collaboration with the Federation of Indian Chambers of Commerce and Industry (FICCI), hosted an investors’ meet in Ahmedabad on August 8th to showcase the state’s investment potential in the textile, metal, metal downstream, chemical, and various other sectors.

Sharma also highlighted the zero-human-interface single window portal named GO-SWIFT, ready-to-move industrial land parcels across the state and the competitive power and water tariffs which are enablers to set up industries and manufacturing units in the state.

Speaking on the Startup Ecosystem in Odisha, Dr Omkar Rai, Executive Chairman, Startup Odisha stated that, “The state has an attractive start-up policy that addresses all nuances of the start-up ecosystem. It elucidates the concept, the registration process, and the incentives offered to the companies. The policy is sector agnostic.”

Addressing the august gathering, Pratap Keshari Deb highlighted the fact that because of abundant natural resources and metal ecosystem advantage, Odisha has become a preferred location for enterprises in the metal and allied sectors. Odisha produces 34.3 percent of the country’s total mineral output and is the leading producer of chromite, nickel, bauxite, manganese, and iron ore. The state government is promoting a Petroleum, Chemical, and Petrochemical Investment Region (PCPIR) in Paradeep, with IOCL as the anchor tenant. Another priority area for our state is food processing sector, which includes seafood processing as well. Odisha has a 480-kilometer coastline and three fully functional ports at Paradeep, Gopalpur, and Dhamra that connects the state to global trade channels, he said.

The minister also highlighted that Odisha is a power surplus state with abundant water resources as well. Highlighting the various initiatives to drum up support for the industrial ecosystem, the minister informed that the Government of Odisha will host the third edition of the “Make in Odisha Conclave” from November 30th to 4th December and extended hearty invitation to all industry leaders to visit Odisha and see for themselves what Odisha has to offer.

Delivering the concluding remarks, Md. Sadique Alam, Director of Industries, Odisha, said that Odisha aspires to be a hub of economic activity in East and South-East Asia. The state is diversifying from its inherent strengths in the mining and metal industries and propelling itself towards downstream & ancillary to value add to the basic metal sector, chemicals, petrochemicals & plastics, food processing, textile & apparel, and other new-age sectors. With big mother plants and bulk manufacturers operating and increasing their capacities throughout the state, there is a massive projected need for ancillaries, he said.

One-to-one “Business to Government (B2G) meetings” were also organized to initiate and sustain heart to heart dialogue with the industry and relevant Industry associations, to understand the underlying sentiments and address the same. In line with such noble thoughts, the Government of Odisha team met 5 (five) industry associations, including marquee names like FICCI, Gujarat Chamber of Commerce & Industry, GESIA, Gujarat Dyestuff Manufacturers Associations and Indian Laminates Manufacturers Associations. In addition to these associations, the delegation from the Government of Odisha also met 19 individual industry captains, which included many household names.