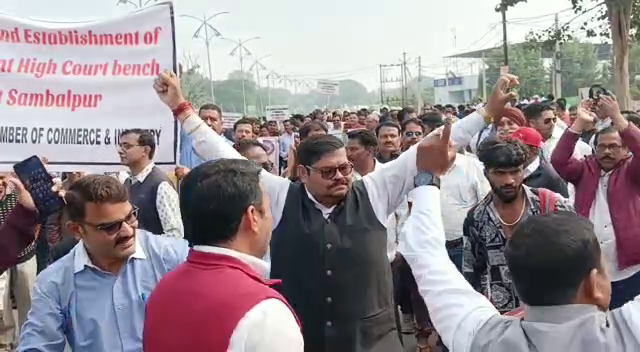 Bhubaneswar: Amid ongoing strike by lawyers, the protestors today launched a state-wide ‘Satyagraha’ demanding establishment of separate High Court benches in their respective regions and opposing arrest order by the Supreme Court for agitation.

Various organisations along with agitating lawyers joined the ‘Satyagraha’ in Sambalpur to mount pressure to set up a permanent bench of Orissa High Court in the western Odisha town.

During the protest, scuffle erupted between police and protestors at Kacheri Chhak. The agitators reportedly stormed the protest area breaking the barricades and clashed with police.

In Bhubaneswar, The members of Bhubaneswar Bar Association staged a peaceful protest today in front of the District and Sessions Court.

Condemning the affidavit that has been filed by Orissa High Court’s Registrar General in the Supreme Court without verifying the reason of lawyers’ strike, the members of Bhubaneswar Bar Association demanded the apex court to look into the matter.

Meanwhile, lawyers in Koraput sat on ‘Satyagraha’ against the Supreme Court’s directive to the Bar Association of India to cancel licence of striking lawyers.

The decision was made at a high-level meeting called by Bhubaneswar Bar Association on December 4. The members had discussed to place their demand before the Supreme Court.

A couple of weeks ago, the apex court had threatened to suspend en masse members of 20 district bar associations in Odisha if they failed to call off their decision to boycott courts.

Taking serious view of an application filed by the Orissa High Court demanding action to rein in the district bar association office bearers who had brought functioning of courts in 20 districts to a standstill with their frequent strike calls, the Supreme Court bench comprising Justices Sanjay Kishan and Abhay S. Oka recommended the Bar Council of India take appropriate action against the district bar associations whose members were involved in protests.

Worth mentioning that the state-wide protests by various lawyers associations are underway demanding relocation of Orissa High Court from Cuttack to Bhubaneswar and establishment of permanent benches in Sambalpur and Berhampur.