While the main accused Bidyasagar Dubey was nabbed, the victim Rabindra Mirgan, who belongs to Maidalpur in Papadahandi tehsil of Nabarangpur, was arrested as well on fraud charges. 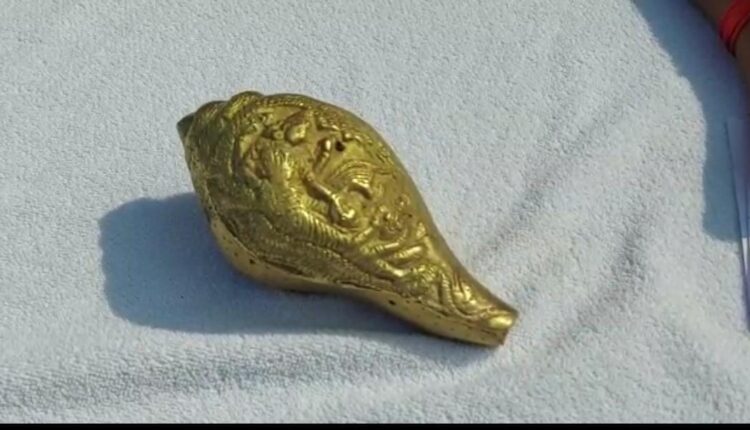 Nabarangpur: A man from Odisha’s Nabarangpur district, who was allegedly abducted over a fake gold conch deal in Chhattisgarh, was rescued by police from Betul in Madhya Pradesh today. While the main accused Bidyasagar Dubey was nabbed, the victim Rabindra Mirgan, who belongs to Maidalpur in Papadahandi tehsil of Nabarangpur, was arrested as well on fraud charges.

As per reports, Mirgan and his friends had gone to Kondagaon in Chhattisgarh to strike a deal with the kidnappers for a gold conch. They were paid an advance of Rs 40,000 for the conch but it was later found to be made of bronze instead of gold. Angered at the deceit, Dubey and his accomplice abducted Mirgan and took him to Betul where they demanded Rs 6 lakh for his release.  Mirgan’s associates however managed to escape. Meanwhile, Mirgan’s wife filed a missing complaint  with police. Later, a team led by sub-inspector Sibji Panda left for Betul and through mobile tracking, rescued Mirgan. Dubey too was apprehended while his accomplice managed to flee.

After his rescue, Mirgan told mediapersons that he had no idea about where the gold conch was sourced from. His friends had reportedly arranged it. ” The kidnappers had got in touch over prospects of business here. My friends had got the gold conch and so we thought of striking a deal. This was a first. I don’t trade gold conchs. I am just a garment trader. I source wholesale supplies and peddle those from door to door in the village,”said Mirgan, adding that he indeed took Rs 40,000 advance for the conch. Earlier he had been booked in two cases of ganja smuggling and rape, he further shared. Mirgan also alleged that kidnappers had partially cut off his genitals.

Meanwhile, addressing mediapersons, Papadahandi SDPO Aditya Sen said, “We rescued the victim. He along with the abductor have both been arrested. They will be produced in court. Mirigan was earlier booked in a ganja smuggling and rape case. The conch has been recovered. A deal of Rs 2 lakh had been clinched and Rs 40,000 paid in advance. No cash has been recovered yet neither it has been found where the gold conch was procured from. Investigation is underway. “