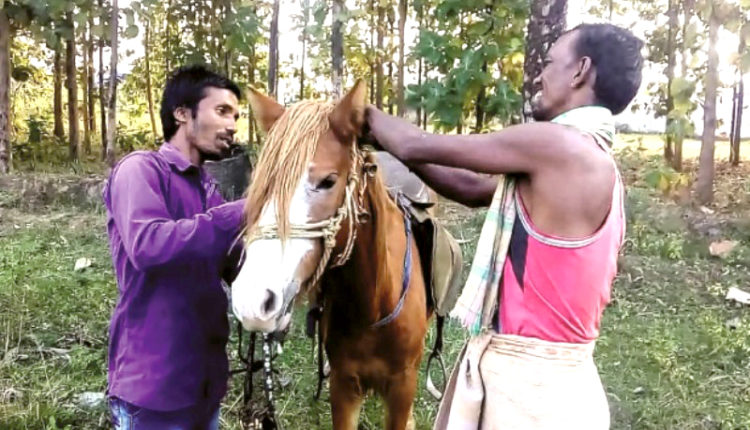 Malkangiri:  Even as many traffic violators have been taken to task following the implementation of the amended  Motor Vehicles Act-2019, cases of faulty challans issued by regional transport officers (RTOs) have exasperated many others in the state.  Amidst all these fusses, a man from Malkangiri district has come up with a  peculiar idea to get away from the maze of a hefty fine for traffic violation.

Sources said one Jatish Mistri of Malkangiri decided to bid farewell to his bike and surprisingly purchased a horse at Rs 23, 000  for his daily travel. He now rides on the horseback for commuting to various places and dropping his kids at school. Moreover, he also sometimes carries patients from his locality to the hospital on his horse.

Jatish’s unique approach has drawn eyeballs of many in the village as well as nearby locality.  Many villagers are seen stopping by the horse and clicking its pictures. When asked, Jatish expressed his immense relief over the fact that he no more has to worry about traffic rule violation or petrol expenses. He also believes that by this way, he is contributing to a less-polluted environment.

Worth mentioning, the state Government collected a total amount of Rs 1 crore as fine from traffic violators between September and November  after implementation of the new MV Act on September 1.