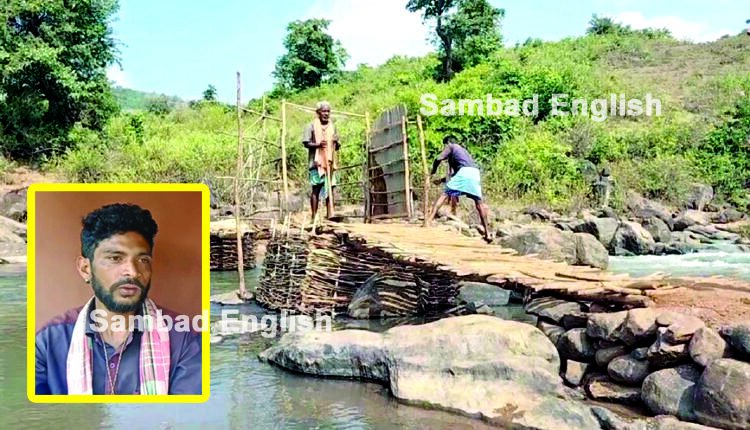 Rayagada: Meet Ranjeet Naik who mortgaged his wife’s gold ornaments to accumulate the requisite funds with which he himself constructed three temporary bridges and a road for his co-villagers. He is a driver by profession and belongs to Gunjaram-Panjara village of Dongasil panchayat under Kashipur block in Rayagada district.

Ranjeet is now being heaped with praise by people from all sections of society for his noble work.

“It was difficult for us to reach the block and panchayat offices, school and hospital,” Ranjeet expressed.

“I accumulated around Rs 70,000 by mortgaging some gold ornaments of my wife. Subsequently, I purchased wooden planks and bamboo for constructing the bridges. It gives me immense pleasure that I could resolve the perennial road connectivity problem of my fellowmen,” Ranjeet gleamed.

“Ranjeet lives with his wife, children and elderly parents. The man is the lone earning member of his family. He quit his job a few months ago after he decided to carry out the construction. His elderly father assisted the man in his noble mission. The father-son duo completed the works after three-months back-breaking labour,” some local residents stated.

Around 120 families are residing in the village, which is located in a hilly area. Bichhala River passes through the village and as is usually filled with water throughout the year. After running from pillar to post, the construction of a concrete bridge was earlier started by the local administration under Mahatma Gandhi National Rural Employment Guarantee Scheme (MGNREGS) but was left mid-way. This added to their woes and locals face utter difficulties during the rainy season every year, the residents added.

This reminds us of Dashrath Manjhi – ‘The Mountain Man’ from Gehlaur village in the Gaya district of Bihar, who carved a road (nearly 30 feet in width and 360 feet in length) through 25 feet-high hill by using only hammers and chisels. Manjhi had taken long 22 years to complete the herculean task. He hogged the limelight in 2015 when a Ketan Mehta-directed biopic of the elderly man was made in Hindi.